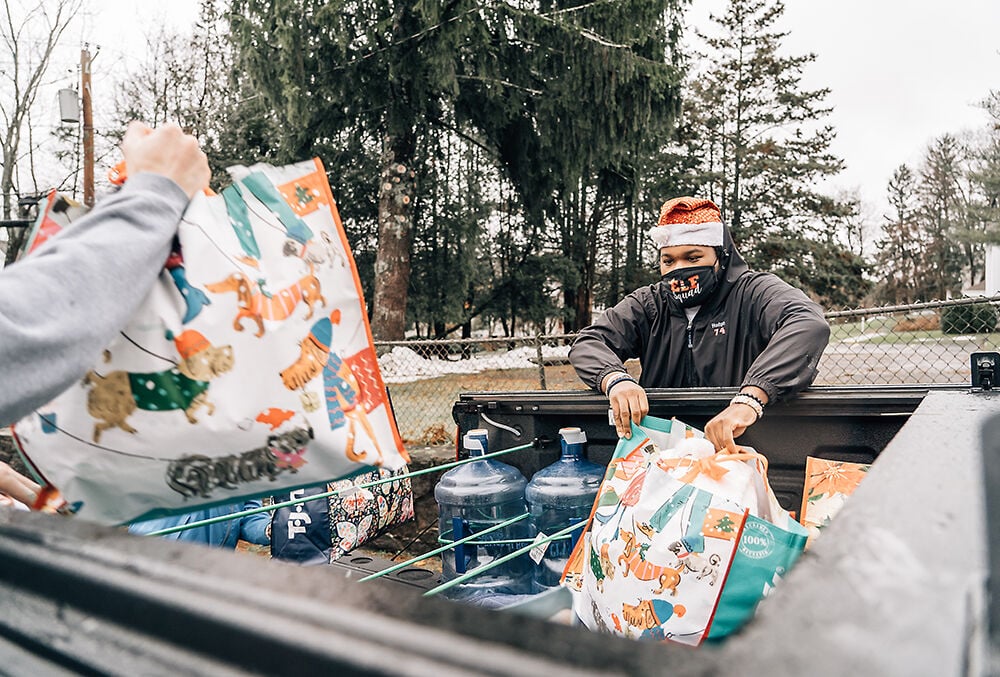 Shagari Hodge, 19, loads his family’s truck with gifts for delivery to a designated family. 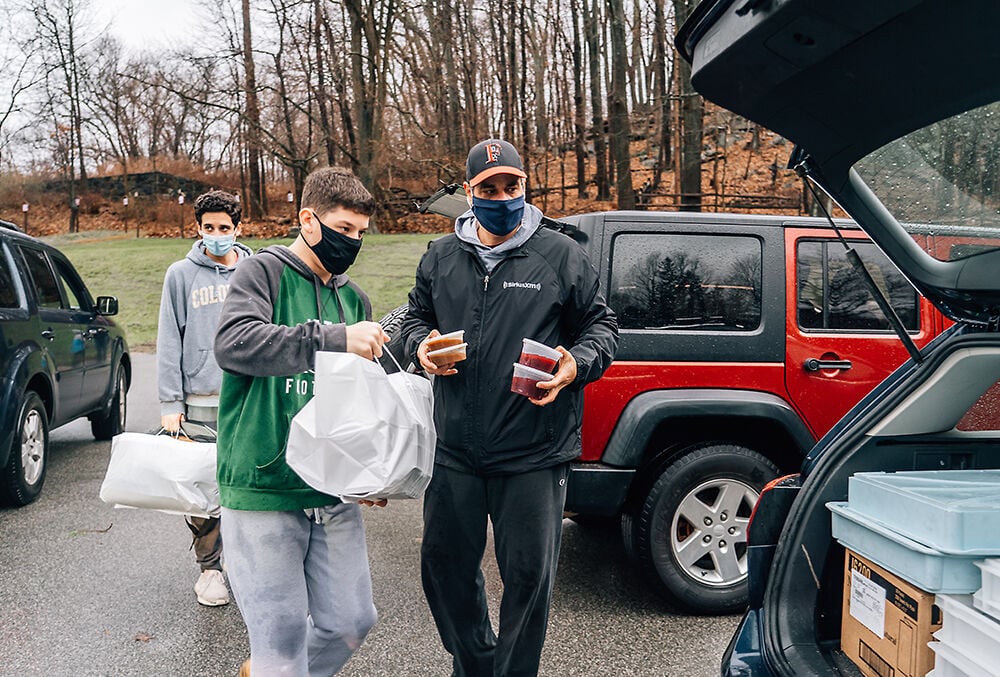 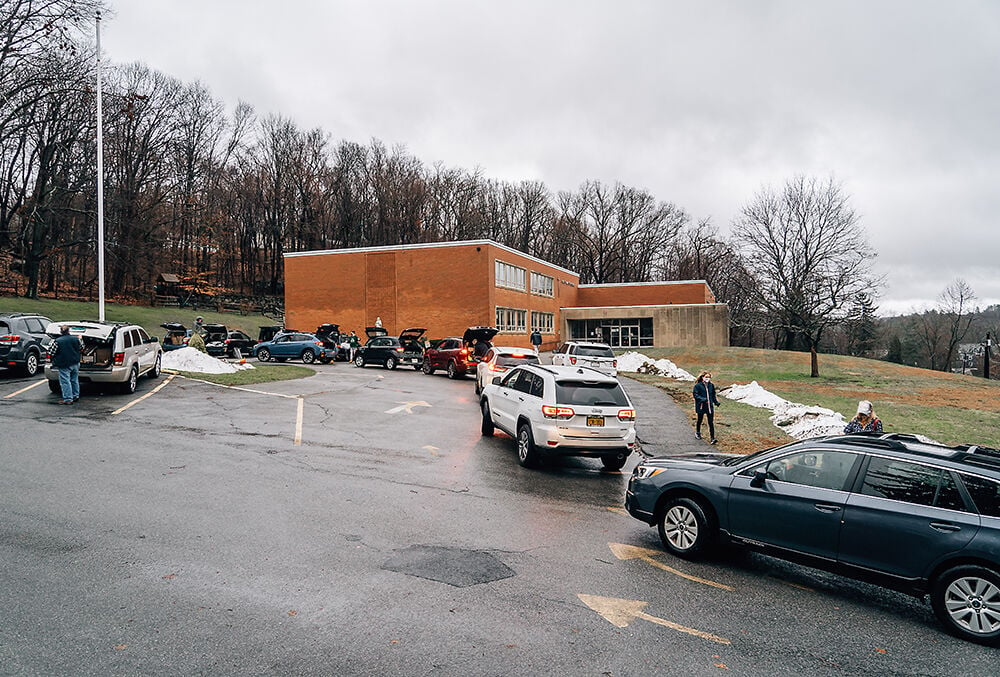 Delivery vehicles line up in the driving rain at St. Mary’s School in Katonah.

Shagari Hodge, 19, loads his family’s truck with gifts for delivery to a designated family.

Delivery vehicles line up in the driving rain at St. Mary’s School in Katonah.

For the first time in 27 years, the gymnasium at St. Mary’s School in Katonah was dark and quiet on Christmas Day. There were no guests pouring in, no elves greeting families and asking what they want for Christmas, no craft tables for the kids, no buffet line full of food, no pictures with Santa, no Mrs. Claus, and no music. The kitchen, usually buzzing with volunteers preparing food for 300 of the area’s most needy residents, was empty. You could hear a pin drop.

Inside of St. Mary’s, the only indication that the Westchester Annual Christmas Dinner was taking place could be found upstairs. In two dark classrooms, sheets of paper were taped to the wall. Each paper included a last name, an assigned number and a list of family members with their age, clothing and shoe size, favorite color ,and gift requests. Below were overflowing shopping bags, filled with gifts to be delivered.

While providing Christmas gifts isn’t unusual for this nonprofit, the nature in which it was done this year is unlike anything the organizers have ever planned. Typically, guests pour into the gymnasium at 11:30 a.m., and during the next three hours, the families and seniors who cannot afford a Christmas meal or gifts, join volunteers for a holiday celebration. But, due to the pandemic and a weather-caused power outage, almost all of the action was, for the first time, outside.

The night before, heavy winds and rain washed away the hope of a white Christmas. Instead, the neighborhood around St. Mary’s was full of fallen trees, and the day was windy, drizzling and overcast with temperatures in the low 50s. At 10 a.m., over the hum of neighbors’ generators, co-coordinator Ben Harvey supervised a redesigned and scaled-down version of the annual event.

Vehicles lined up down the road and slowly pulled into the parking area where they were greeted by Stephanie Rolin, an emergency room psychiatrist at Columbia Presbyterian in Manhattan. She offered each family member a squirt of hand sanitizer and handed them a pair of disposable gloves. The drivers then received a piece of paper with the name, phone number and address of a family in need. They were also given an assigned family number on red construction paper to place on their dashboard and asked to open their trunks.

As they moved through the line, food and gifts corresponding to the number on the dashboard were placed in the trunk. The volunteers in the car were offered another squirt of hand sanitizer and sent off to deliver a holiday meal and gifts to their assigned families. For Mr. Harvey, Lauren Torre and Jamer Breene, the co-coordinators of the event, there was never a doubt that they’d help those in need this holiday season. It was just a question of how.

“We knew we had to reimagine it,” said Mr. Harvey. “So, one night in October, the three of us, along with Whitney Brown, the fundraising coordinator, had a brainstorming session at The Whitlock on Katonah Avenue. We sat outside and went right to work.”

“We had to figure out how to build something from scratch that would be consistent with what we’ve done in the past, including the services we provide for the local community and the volunteer experience,” Mr. Harvey continued. “Two rounds of drinks and some chicken wings later, we’d hatched the initial concept.”

After the idea was set, Ms. Torre placed a call to Joe Bueti and Mogan Anthony, who own Village Social, Locali, Pubstreet and Fatt Root. She suggested they bring their food truck to St. Mary’s on Christmas morning, but Mr. Bueti and Mr. Anthony had a better idea. Instead, they chose to prepare the food, which they donated to the event, on Dec. 24 in Village Social’s kitchen in Mount Kisco. On Christmas morning, Ms. Torre and her family, along with Mr. Harvey and Mr. Breene, drove to the restaurant and packed their vehicles full of holiday meals to feed the families on their list.

North Castle Insurance and Gianni Piccolino, whose restaurants include Basilico and Stone Fire, donated what Ms. Torre says is a “generous amount of money” towards the cost of food and gifts.

“I was elated that we were able to safely help make the holiday special for 54 families and seniors,” said Ms. Torre. “Where there’s a will there’s a way. I never had a doubt that this team could pull this dinner off in some way. Not one of the participants — vendors, shoppers, drivers — hesitated when asked if they wanted to help, not one. Christmas Day ran like a well-oiled machine, and there were zero problems.”

Planning this year’s event required extraordinary preparation. In the past, volunteer “elves” would ask the guests what they would like for Christmas at the start of the dinner. The elves would then hurry upstairs to visit three classrooms packed full of gifts, clothing and toys. They would collect items that closely matched the requests of the men, women and children, and bring the holiday presents downstairs to their new owner.

This year, of course, was different. The elves called the families earlier in the month to ask for the family member’s age, size, favorite color and gift requests. Aft that, designated shoppers headed to the stores.

Every shopper was provided an in-depth letter with instructions, including budget, how to separate gifts by family, and when and where to drop them off, explained Ms. Torre. “We organized the rooms at St. Mary’s by family, and the gifts were all placed accordingly,” she said. “Then, my team went through and added toys where appropriate, beauty and personal care products and a table ornament to make it more special. We also included a chocolate bar from Mast chocolatiers and a loaf of bread from LMNOP Bakery, which the businesses donated.” In the end, she noted, “it was less chaotic because we had lead time” and specific information like sizing and preference, “so we could be very specific with each gift.”

The Knights of Columbus also provided a large donation of new coats for this year’s guests.

Mr. Harvey said one of the biggest frustrations with this year’s restructured event was the loss of the opportunity to interact with the dinner guests on a personal level. “We spend time talking to them, looking into their eyes, seeing their smiles and hearing them laugh,” he described. “And it’s truly special when we’re able to see their reactions as they receive their gifts. You can feel their excitement and there’s an incredible energy throughout the room. Unfortunately, none of that was possible this year because there was virtually no contact between the volunteers or with the dinner guests.”

But longtime volunteers who knew this year would look and feel different, still showed up on Christmas morning. Once their vehicles were loaded with food and gifts, they headed out to deliver everything to the assigned families. When they arrived, they parked outside and called the family to confirm someone was home. The volunteer then brought the packages to the front door, rang the bell and returned to their vehicle before the door opened. And although this lack of in-person contact was designed to prevent the spread of the coronavirus, meaningful connections were still made.

For John Bart, who volunteered in the kitchen with his son for the past five years while his wife and daughter served food and drinks, this year’s distanced gathering was even more special.

“We didn’t know what to expect this year,” said Mr. Bart, “all we knew is that it would be a delivery. Later that day, after we’d dropped off the food and gifts to a family in Mount Kisco, I had one of the most rewarding experiences of my life. The dad called me, using the number I texted him from when we dropped off the food, and left me the most amazing voicemail full of gratitude and thanks.”

“I learned it was only his second Christmas in the states, and it was very special for him to have his community bring food and gifts to his family,” Mr. Bart continued. “At the end of his message, he said, ‘Mr. Bart, If there’s ever anything that you need, or anything that I can do for you, please let me know. I’m here for you.’ I was blown away. It’s something I’ll never forget.”