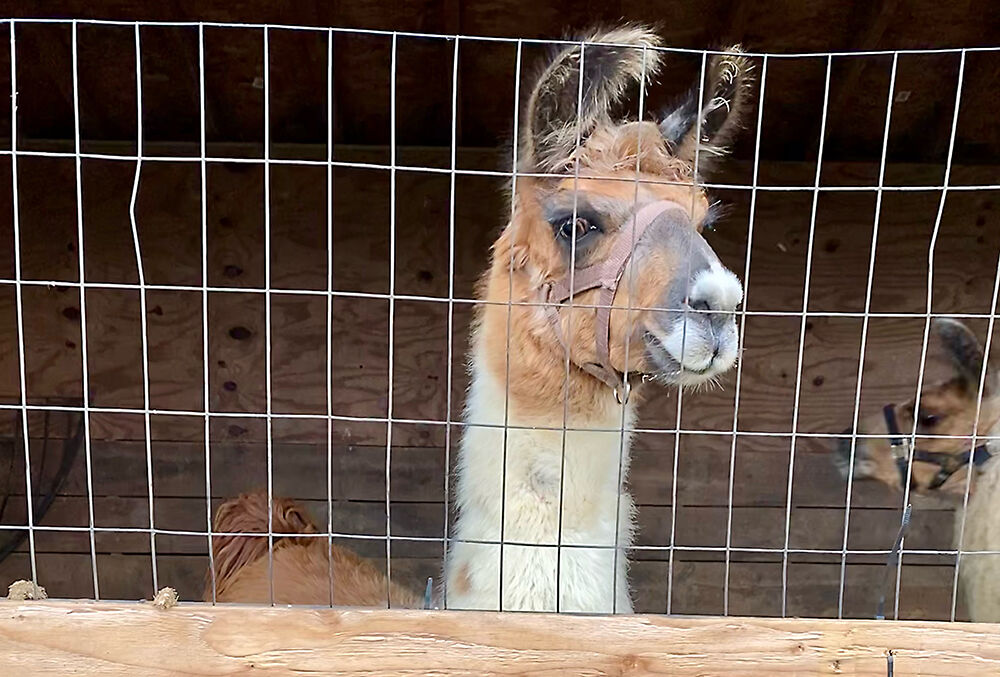 After two weeks of roaming Bedford on his own, Gizmo is safe and sound at his home. 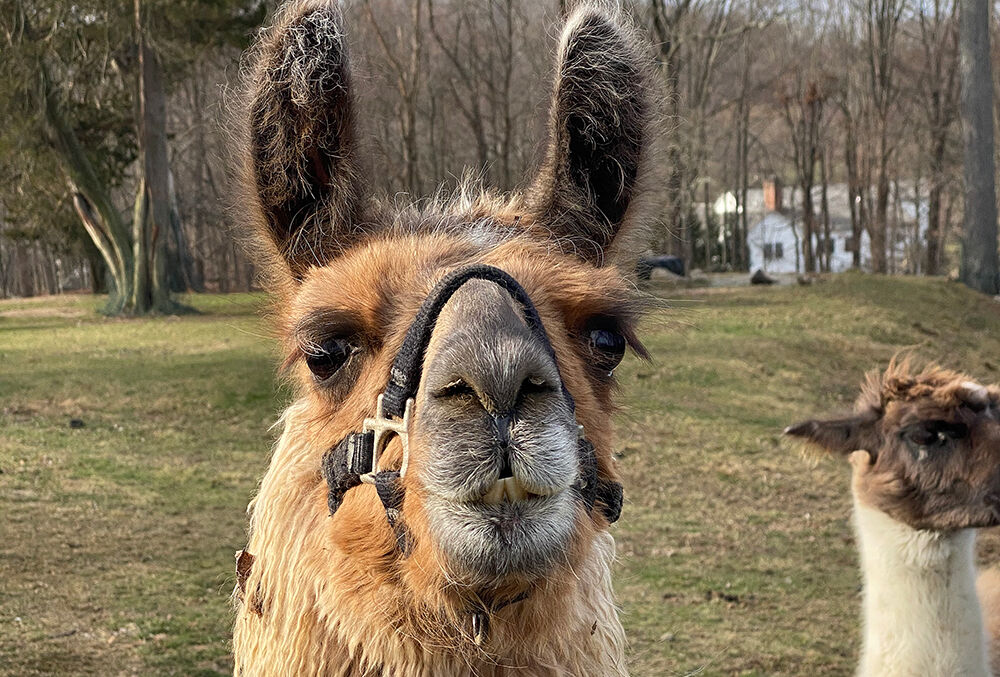 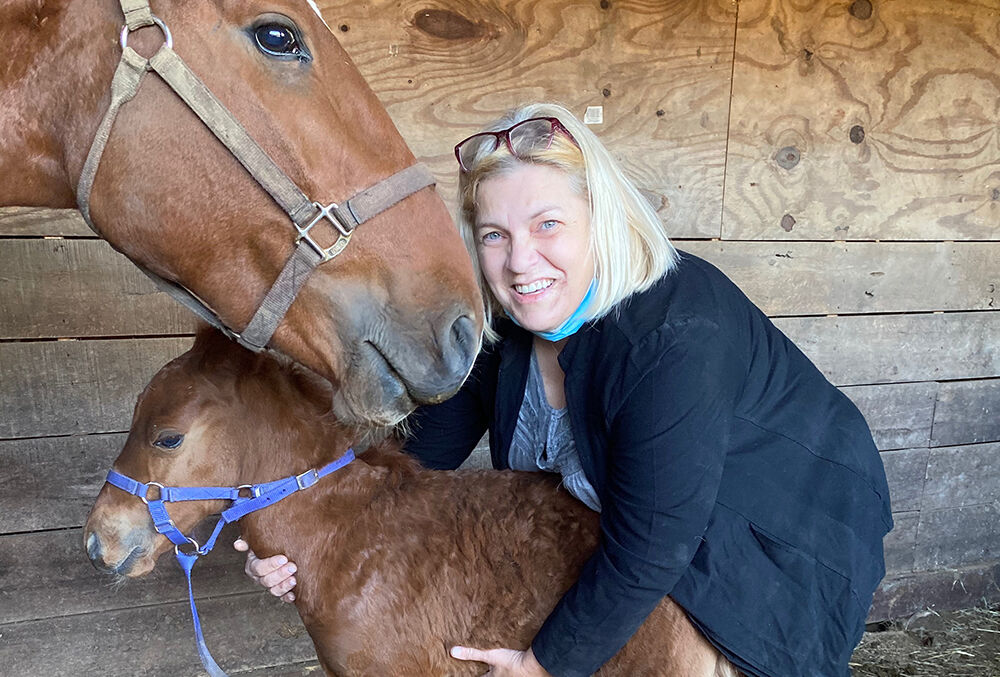 Diana Heimann at the Bedford Corners property she manages.

After two weeks of roaming Bedford on his own, Gizmo is safe and sound at his home.

Diana Heimann at the Bedford Corners property she manages.

Diana Heimann moved to Bedford to begin working as a property manager for an estate in Bedford Corners. Ms. Heimann’s main draw to the estate were the llamas. As an avid animal lover, she was looking forward to caring for the llamas and bringing along animals of her own.

Then one of the two original llamas at the property passed away, leaving King Edward, the survivor, on his own. Ms. Heimann decided to rescue another pair of llamas to keep King Edward company.

It took only 48 hours for Ms. Heimann to find the perfect pair of llamas, who were living in Indiana: Gizmo and Sandman. The two llamas were 7 years old and had spent their entire lives together, but they were being bullied by their fellow llamas. Ms. Heimann was determined to create a beautiful life for the pair in Bedford Corners.

In the evening of Dec. 11, Gizmo and Sandman arrived in Bedford. The next day, the pair was moved into the paddock and introduced to their new paddock mates, which were mostly goats and mules. Although the pair seemed nervous, Ms. Heimann felt they were ready to be left in the paddock overnight.

Sometime overnight, Gizmo and Sandman jumped the paddock fence, but initially didn’t go very far. The farm’s groundskeeper, Leo Garcia, who is quite experienced with a lasso, was able to lasso Sandman on the property, but when he approached Gizmo, the llama quickly fled and disappeared into the Guard Hill Preserve.

The next day, Ms. Heimann and a dozen others searched the surrounding area for him, to no avail.

“The whole idea was to rescue him and then I lost him!” Ms. Heimann exclaimed.

Even after handing out fliers to neighbors and approaching residents in their homes, Ms. Heimann still had no leads on Gizmo’s whereabouts. However, Ms. Heimann shortly realized that she would not be alone in her search.

A fellow Bedford resident, Christina Dochtermann, learned of Gizmo’s disappearance on Dec. 15. She immediately decided to pitch into the search. Ms. Dochtermann reached out to her many contacts, through the Bedford Riding Lanes Association, Bedford Fire Department where she volunteers, and the Bedford Police Department. As the search neared the end of its first week with little progress, Ms. Heimann and Ms. Dochtermann ramped up their efforts.

Ms. Dochtermann said that because there is so much open land in the area, she had a feeling that Gizmo may not have wandered far and could be “hiding in plain sight.”

Ms. Dochtermann continued to talk to neighbors and encourage people to look for Gizmo while she and her husband hiked every day in the hopes of finding him.

In the meantime, Ms. Heimann was also trying to find creative ways to locate the missing llama. She connected with an upstate company that specializes in thermal drones to locate lost animals. She contacted local animal rescues and checked New York State Department of Transportation records to see if there were any reports of a vehicle strike.

“It was a sad call to have to make,” Ms. Heimann said.

She also spent around $1,000 printing “missing” posters, which she posted all over town and in local businesses.

Concerned residents tried to be helpful. Some sent Ms. Heimann photos of animal droppings, asking her to confirm if they were hopeful signs of Gizmo’s wanderings (none panned out). Others texted her excited messages announcing they had seen a llama in the area, but the sightings turned out to be of other happy llamas grazing on Bedford farms.

With all of their efforts falling short and the recent nor’easter and following rain causing concern, Ms. Dochtermann and Ms. Heimann decided that something more had to be done. When the search headed into its third week, the two created Find Gizmo Day. Using her background in marketing, Ms. Dochtermann led the online campaign, which asked residents to go on a hike to look for Gizmo on Wednesday, Dec. 30, from noon to 3 p.m. (“If you can, please bring a bucket of grain to shake!” advised the emailed flier.)

With so many families home for the holidays, Ms. Docterman said the day created an unusual opportunity for everyone to get outside at the same time in search of Gizmo.

“There was a lost soul who needed to be found,” Ms. Dochtermann said.

Ms. Dochtermann and her husband hiked across more than 100 acres that Wednesday with no success, so she went to see Ms. Heimann at the estate.

It turned out that earlier that day Gizmo’s disappearance began gaining attention from national news outlets including The New York Times. Ms. Heimann was doing an interview with CBS when Ms. Dochtermann arrived. While the interview was being filmed, Ms. Heimann hung one of her “Find Gizmo” posters on a nearby tree on her street.

Ms. Heimann said she was about to hit send on a Facebook post thanking everyone for their efforts on Find Gizmo Day when she received a text message image of her missing llama.

Llamas have become such a common site in the area that workers on a job at a nearby house saw a llama almost every day on the other side of a fence, but assumed it belonged to the neighbor. Leaving work on Dec. 30, the headlights of the workers’ car spotted the “Find Gizmo” poster that Ms. Heimann posted a few hours earlier during the TV interview.

The workers realized the llama that kept them company on the job was actually Gizmo, and that he had, in fact, been “hiding in plain sight” like Ms. Dochtermann suspected.

“Poor Gizmo probably thought: ‘When are these people going to feed me?’” Ms. Heimann said.

After several attempts, Mr. Garcia was able to lasso Gizmo, and a caravan of cars escorted Mr. Garcia and Gizmo back to his home. As they made their way down the street, Ms. Heimann said neighbors began yelling “They got Gizmo!” from their houses.

Ms. Heimann said she was extremely grateful for the workers who found Gizmo. Also,

immediately following Gizmo’s return, Ms. Heimann said she had her veterinarian check on him. After a special consultation with a llama ophthalmologist, Gizmo was diagnosed with a slight eye infection, which healed quickly.

Other than that, Ms. Heimann said Gizmo lost around 30 pounds and was in need of electrolytes, which she said most likely means he wasn’t finding a lot of food. Ms. Heimann said she was not surprised that Gizmo was so resilient. The llama stands around 5-feet tall and weighs 300 pounds. Ms. Heimann said that while on his own, Gizmo foraged for food, ate grass and drank from a nearby brook.

Even though Gizmo was found, his story doesn’t end there.

Following the reunion, Gizmo’s story appeared on many news stations and outlets, including a special on “Inside Edition.” Gizmo also acquired many local fans who joined in his search.

“To have the community come forward like this was one of the nicest things I’ve ever seen,”

Ms. Dochtermann said. She added that she is still receiving messages from people apologizing for being out of town during the search and unable to join the rescue efforts.

In an effort to raise money for some of the animal rescues who helped during Gizmo’s absence, Ms. Heimann began selling T-shirts featuring Gizmo’s “missing” poster. Gizmo fans can also purchase a missing poster, signed by Gizmo himself.

Ms. Heimann said there are plans for Gizmo to “write” his own children’s book recounting his experience being bullied on a farm in Indiana and fending for himself in the woods of Bedford.

“He’s taken a very positive approach to all this,” Ms. Heimann joked.