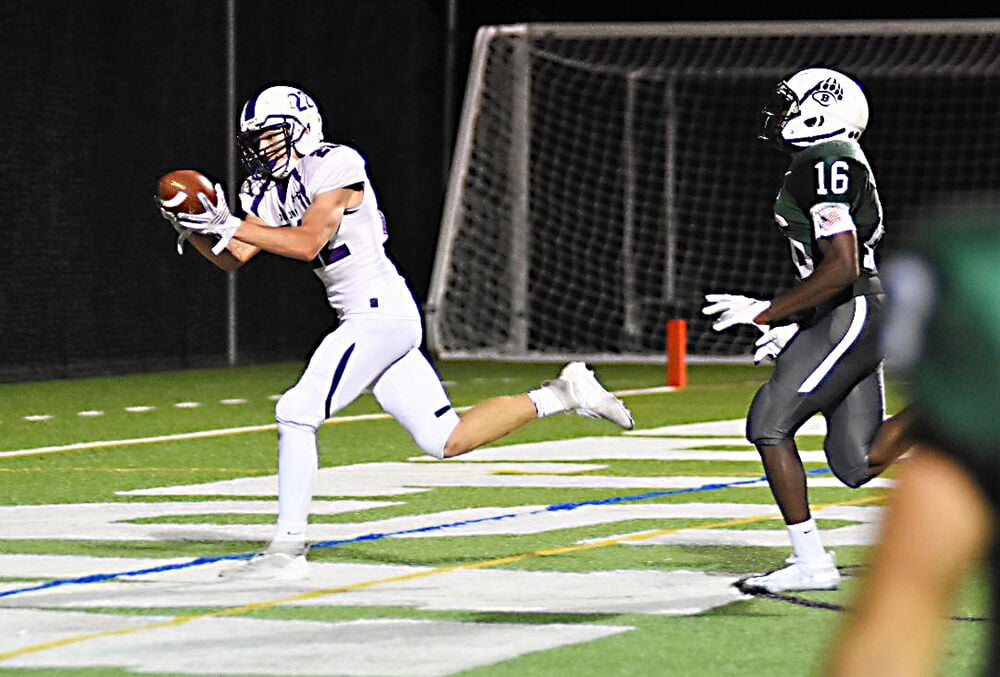 No one knows for sure if we will see a John Jay receiver, like Max Miraglia a year ago, haul in a scoring pass this fall. 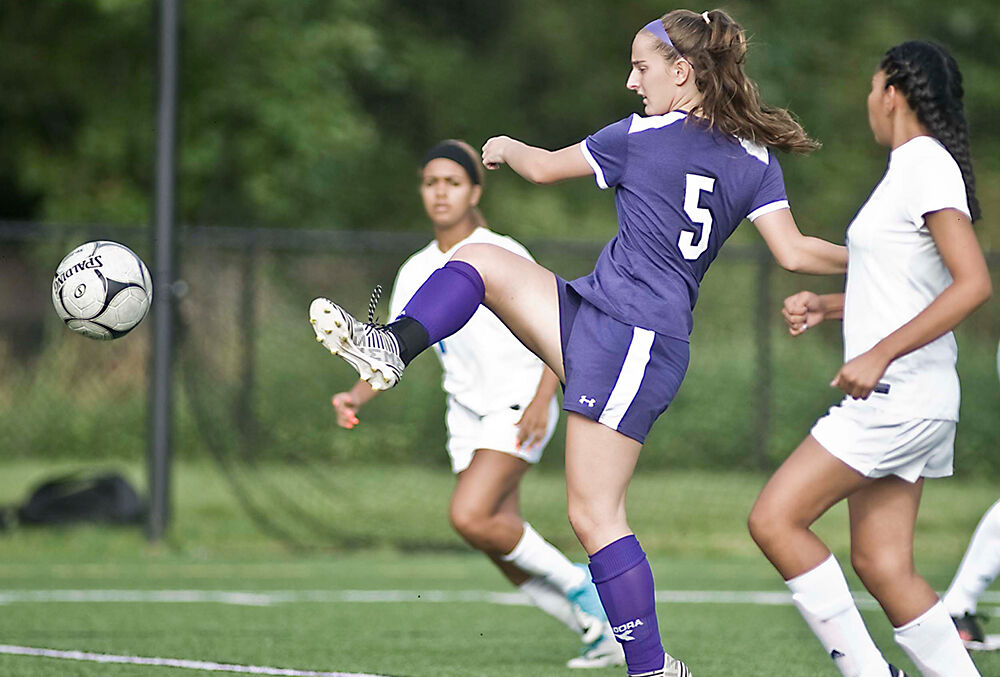 If all goes as planned, Katie Labriola and her Jay soccer teammates will begin practice Sept. 29.

No one knows for sure if we will see a John Jay receiver, like Max Miraglia a year ago, haul in a scoring pass this fall.

If all goes as planned, Katie Labriola and her Jay soccer teammates will begin practice Sept. 29.

Another week has passed and there still has been no definitive answers from school districts throughout the state as to whether or not there will be fall high school sports.

Both Section I and the New York State Public High School Athletic Association did make important announcements, however, over that span.

On Sept. 2, Section I announced that it was pushing back the start of its fall season to Tuesday, Sept. 29. The redefined start date for fall practices had been Sept. 21.

Meanwhile, on Sept. 4, the NYSPHSAA delivered its Return to Interscholastic Athletics guidelines and safety protocols to administrators throughout the state. The document contained a few surprises.

In a press release Sept. 2, Section I Director of Communications Brian Howard stated that, after reviewing all the data submitted to them by Lower Hudson Council of School Superintendents, it was evident that “there is a desire to focus on the reopening of schools and the safety of those involved.”

With that in mind, the Executive Committee of Section I opted to push the start date back eight days.

However, the ultimate decision to play or not will come from each individual school district. Those decisions should come down by the middle of this month.

“As always, the Section has made the safety and well-being of our student-athletes, coaches, officials and communities its top priority,” Todd Santabarbara, the executive director of Section I, said in the press release. “Today’s decision by the Executive Committee represents a balance between supporting schools as they reopen amid this complex and unprecedented time, while also providing for the safe return for our student-athletes to interscholastic competition.”

Football, volleyball and cheering have been labeled high-risk sports and will only be allowed to practice. Over the course of the fall season, if it is played, these sports will continue to be reviewed and may be allowed to compete.

“The Section continues to be guided by a belief in the value that interscholastic sports participation contributes to the student-athlete’s feelings of belonging and overall social-emotional well-being,” Santabarbara said.

Still on the board is the Oct. 19 start to competitions for the fall season, as well as the Nov. 30 start of practice for the winter seasons.

“Based on what I can see, it was a compromise to support schools who are starting off their learning virtually and those that are in the hybrid model,” said Chris McCarthy, John Jay director of health, physical education, athletics and wellness. “Given the circumstances, waiting the extra week is probably a good thing with so many unknowns.”

He continued, “Girls’ swimming is a facilities issue, not a permission to compete issue. Many schools rely on outside facilities to swim, and many of them are not opening or allowing outside groups.”

While girls’ swimming is not listed as a high-risk sport and is open for competition this fall, the lack of “open and available” facilities is a potential problem that still needs to be resolved.

Meanwhile, McCarthy remains hopeful that football, volleyball and cheer will ultimately be allowed to compete.

“If football, competitive cheer and volleyball begin to practice and they allow them to play after Oct. 19, we can still get a decent season in, possibly six games, including Thanksgiving Day,” he said. “Wouldn’t that be a silver lining we didn’t see coming?”

McCarthy added, “By allowing them to compete with the infection rate as low as it is now, we will collect important data for the upcoming winter season, which has three high-risk sports that are all inside. Let them compete and let’s learn from it.”

“We are going to follow the protocol and guidelines that they set,” Clark said. “We are continuing to do our Zoom meetings by position. It is different. Normally, by now, I am frantic and breaking down film and preparing for a game. Now I am still putting in our offense.”

He added, “I just want us to be as ready as possible. If we get the chance to play, I want to be able to hit the ground running.”

Meanwhile, Jay volleyball head coach Tom Rizzotti said he was as frustrated as his players.

“This waiting game has been tough,” he said. “Every new bit of news seems to come with a caveat that more information is still to come. One way or another, having a final decision get made will be nice.”

Rizzotti continued, “It is seeming less and less likely there will be any volleyball games in the fall, but I am holding out hope we will be able to have some sort of season in the spring. And I am hoping that we’ll be able to practice soon.”

On a personal level, there have been some benefits, he noted. “This has been the first time in 17 years I’ve been home in August and it’s weird. It’s been really, really nice having extra time with my family, but I miss the team and preseason.”

“I think the thing that has been the hardest to communicate has been why volleyball was classified as a high-risk sport, but not other indoor sports that share equipment like basketball,” the coach said. “If they wanted to make that distinction it should have been applied evenly. Basketball doesn’t have the opportunity like we do to clean and disinfect equipment — aka the ball — and the space between players is much, much less than volleyball.”

Meanwhile, the NYSPHSAA guidelines document distributed Sept. 4 was 41-pages and covered everything from disinfecting tennis balls to social distancing of spectators to the use of electronic whistles by officials.

Some decisions were vague. For example, that face coverings will be required for practice and competition in sports where maintaining 6 feet of distance between participants (soccer, field hockey, cross-country, doubles tennis), “unless players are unable to tolerate a face covering for the physical activity.”

Meanwhile, all coaches, trainers, reserve players must wear a mask and maintain social distancing while on the sidelines.

Each school will need to do temperature checks at games, where players will no longer be allowed to shake hands, fist bump or hug.

Spectators will be limited to two per athlete, with social distancing and mask protocols in effect. Media will be allowed on-site of contests but must follow district rules and regulations.

There will be no state tournament for fall sports, however, in a reversal, they are back on the table for the winter and spring seasons. Sections can hold championships for the fall season and it is expected Section I will do this.

To participate in a fall sport, athletes will need 10 practice sessions — a dozen for football.

Another change is that schools will now be able to venture outside their section for games.

The seven consecutive day rule for participation has been waived for the fall season.

“I just think that all administrators, including athletic directors, are incredibly stressed and want nothing more than to get their buildings open in the safest way possible,” McCarthy said. “I believe that all superintendents want their athletic teams on the field, but it can’t be at the expense of our schools staying open. It’s about priorities right now and health, safety, and our student’s education trumps all.”

The complete document can be found at nysphsaa.org.

Section 8, which covers schools in Nassau County on Long Island, announced Aug. 26 that it was suspending fall sports until 2021.

Section 11 on Long Island, which included Suffolk County schools, is planning to participate in sports this fall.

The announcement Sept. 9 by the New York State Public High School Athletic Association was a bombshell that took the athletic community by surprise.

With the COVID-19 pandemic having wiped out last spring’s interscholastic athletics season and already delayed the fall season start date from Aug. 24 to Sept. 21 for New York state — Sept. 29 for Section 1 — there were still no answers as to whether football, boys and girls volleyball and cheerleading, deemed the fall season’s high-risk sports, were going to be permitted to play. At 7:30 p.m., NYSPHSAA announced in a press release that those three sports will make up the fall 2 season, which, beginning March 1, will be wedged between the winter and spring seasons, with a delayed start to the spring from March 15 to April 19. There will be about a two-week overlap of the two seasons, with fall 2 recommended to end May 1.

Like the low- and moderate-risk fall sports, the fall 2 sports will not have regional or state championship tournaments, while the winter and spring championships are currently still on the schedule. Each section can opt to do playoffs in the fall and fall 2 but could be constrained by a lack of time to effectively do so.

High-risk fall teams were going to be permitted to practice with no guarantee of a season. However, after meeting virtually with 500 athletic directors since releasing its report last Friday, NYSPHSAA heard overwhelming feedback favoring a major decision on high-risk sports sooner rather than later

“This decision was focused on attempting to provide those football and volleyball athletes and competitive cheerleaders… with the opportunity to have a quality experience,” NYSPHSAA ExecutiveDirector Robert Zayas said during a press conference Wednesday night, Sept. 9.