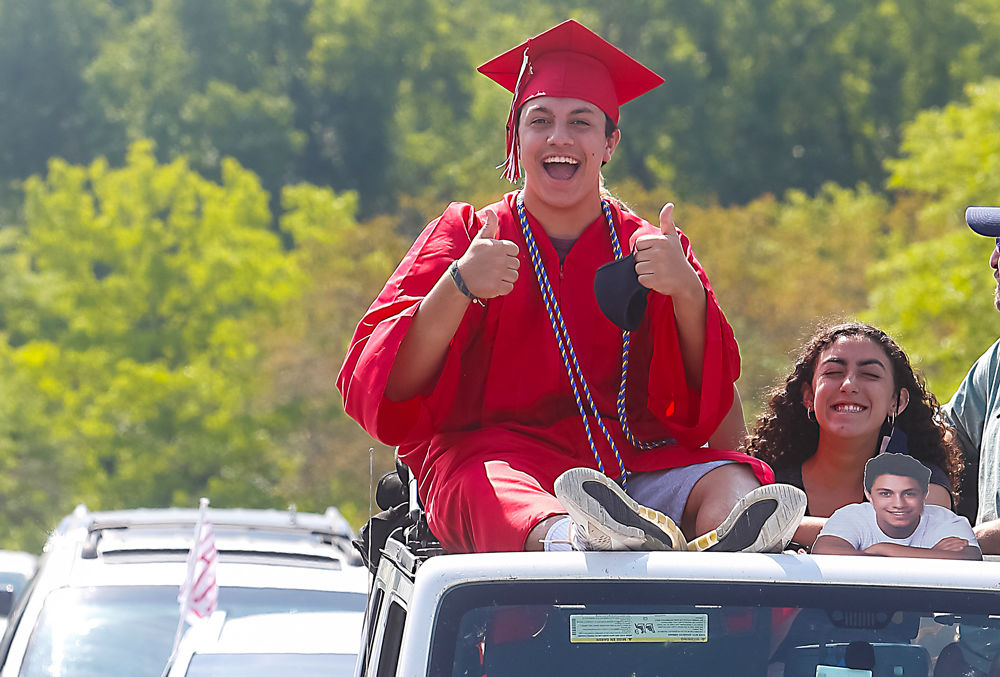 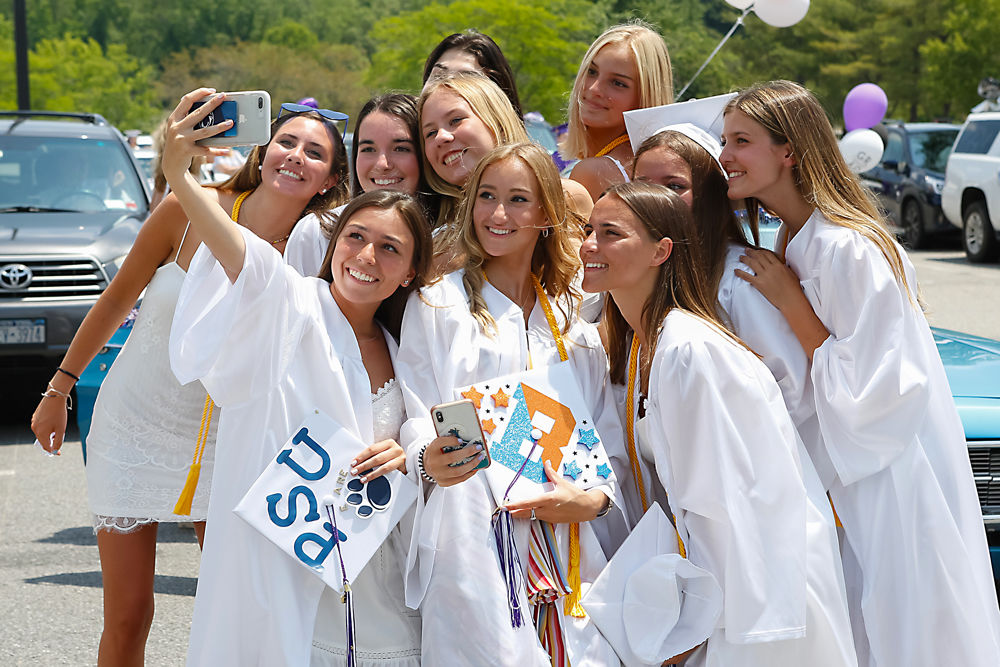 The parking lot of Jefferson Valley Mall in Yorktown Heights was filled on Tuesday with families packed into their cars with the air conditioning and radios cranked all the way up.

Welcome to the Class of 2020 graduation, drive-in style.

The unusual setting and format of the John Jay and Fox Lane ceremonies reflected the safety measures district officials were forced to take in response to the coronavirus pandemic.

Here is an overview of the ceremonies at both high schools. More detailed coverage will appear in the special graduation section of The Record-Review’s July 3 issue.

As vehicles filed in, volunteers handed out roses to the graduates and a tribute video to the John Jay High School class of 2020 played on the large screen, resembling an outdoor movie theater. Promptly at 1:30 p.m., the sounds of “Pomp and Circumstance” echoed throughout the parking lot as each family listened through their radios.

John Jay High School valedictorian Jessica Leff sang the national anthem before Principal Steven Siciliano gave welcoming remarks. He encouraged families to honk their horns to mimic claps, and asked everyone to remain in their cars until the tassel flip at the end of the ceremony, signifying the students’ official status as John Jay graduates.

Each speaker’s remarks were shortened to four minutes for the live ceremony and the extended version of the speeches were presented in the virtual graduation ceremony posted on John Jay High School’s website.

The voices of class presidents Charlie Oestreicher and Sebastian Degenhardt came through the radio next. “Today, our chaotic, unprecedented and memorable journey comes to an official close,” Mr. Degenhardt said. The class presidents went on to present the Key of Knowledge to the class of 2021. They finished their remarks on a hopeful and encouraging note for the class of 2020.

“Our high school experience occurred amidst pandemics, gun violence, racial and political turmoil and environmental issues, yet we are emerging as a thriving, capable and ambitious class with so much to offer the world,” Mr. Degenhardt said. “We are the class that will be remembered for the incredible resilience that we displayed, not for the obstacles we faced.”

Mr. Siciliano introduced salutatorian Sydney Aronson. Ms. Aronson spoke about how she and her classmates have been imagining their high school graduation with certainty all of their lives. “I think it is safe to say that we, the class of 2020, had a pretty unique ending to our grand high school experience,” Ms. Aronson said.

Valedictorian Jessica Leff highlighted a few positives of the graduates’ unique situation, like how “corona-cation” allowed her to explore new things, like watching the TV show, “Grey’s Anatomy.” She quoted the show’s lead character, saying, “Change is constant. It’s how we experience change that’s up to you.” Then she went on, “We choose how we experience change: whether we combat foundational injustices, or simply stand on the sidelines and let these atrocities continue. Change starts with us.”

In keeping with past ceremonies, there were performances by the school’s three a cappella groups, -- Treblemakers, Noteables and Rolling Tones — only this time the performances were prerecorded and played on the big screen.

John Jay High School teacher Jason Mahlke, who was selected by the students to give the keynote address, said he would not be making a speech, but rather would deliver a plea. “Take action to support, to learn, to heal and to rebuild a world where humanity is shared entirely,” Mr. Mahlke said. “Take action against those who say, ‘This is the way things are,’ when you see deceit, intolerance, racism, sexism or dehumanization at its core.”

Tamar Hassman, who was chosen by classmates to deliver the senior class address, said graduation was a huge accomplishment only made possible by everyone in the community. Another major accomplishment, she joked, was being at a mall and not going inside to shop, setting off another round of car horns in place of laughter.

Then, each graduate was presented alongside a slide show of photographs and videos. In their self-made videos, many students encouraged their classmates to vote in the next elections, and thanked friends and family for their support.

As each name was announced, the sounds of horns honking from the graduates’ families could be heard.

Mr. Siciliano asked the graduates to step out of their vehicles for the tassel flip.

“Three, two, one,” Mr. Siciliano said, prompting the graduates to flip their tassel and gain some sense of normalcy from the longstanding graduation tradition. “Congratulations class of 2020!” he declared.

Members of the Fox Lane High School graduating class of 2020 were accepted with a cacophony of honking in a one-of-a-kind ceremony at the Jefferson Valley Mall.

Instead of being seated in the lush estate setting of Caramoor in Katonah, graduates and their guests filled the mall’s parking lots. Friends called to each other from their cars, donning spring dresses and their best suits along with surgical masks. Families made the most of the occasion, decorating their vehicles with balloons and packing coolers in the trunk to enjoy during the drive-in ceremony.

A committee made up of staff, students and Fox Lane High School Association members planned the alternative graduation. They faced the difficult task of creating a ceremony that adhered to strict social distancing guidelines while incorporating traditional graduation elements. On Tuesday, there were familiar elements. For instance, senior Daniella Danisi sang the national anthem, although it was a prerecorded performance. The Fox Lane High School Chamber Choir also gave a prerecorded performance of “Somewhere” from “West Side Story.”

Rising to the unique challenges presented by the coronavirus will better prepare the graduating class of 2020 for lies ahead, salutatorian Valeriy Donchev said.

“Today we celebrate not the end of the storm of life, for that storm is far from over, but that we have learned how to dance, each their own dance, in a rain that cannot wear us down,” he said.

That resilience, noted Interim Superintendent Joel Adelberg, was evident from the moment he welcomed these students to FLHS exactly four years ago.

“You have proven in the past three months, as you demonstrated to me back in 2016, that you have the grit, determination and fortitude to grab whatever opportunities life hands you,” Mr. Adelberg said.

Student speaker Sandy Salazar shared her own story of grit, having balanced her studies and growing responsibilities at home to become the first in her family to attend college. “We all are survivors, our hardships will help us achieve our goals and our challenges will make us stronger,” Ms. Salazar said.

Class advisor Amy Pirro gave a spirited speech about the power of approaching life with a focus on love. “Choose your paths in life because you love others and you love what you are doing,” Ms. Pirro said.

In light of recent protests over policing practices and criminal justice reform, the class of 2020 decided to allocate the funds for this year’s senior gift to the National Association for the Advancement of Colored People, the Mount Kisco Interfaith Food Pantry and Neighbors Link.

At the close of the ceremony, students craned their necks out of car windows or peeked out of sunroofs as they were directed to move their graduation cap tassels to the left, officially marking them as graduates.

A chorus of car horns echoed throughout the lot, indicating the graduating class of 2020 had arrived.

A recording of the event will be available on the district website at bcsdny.org.