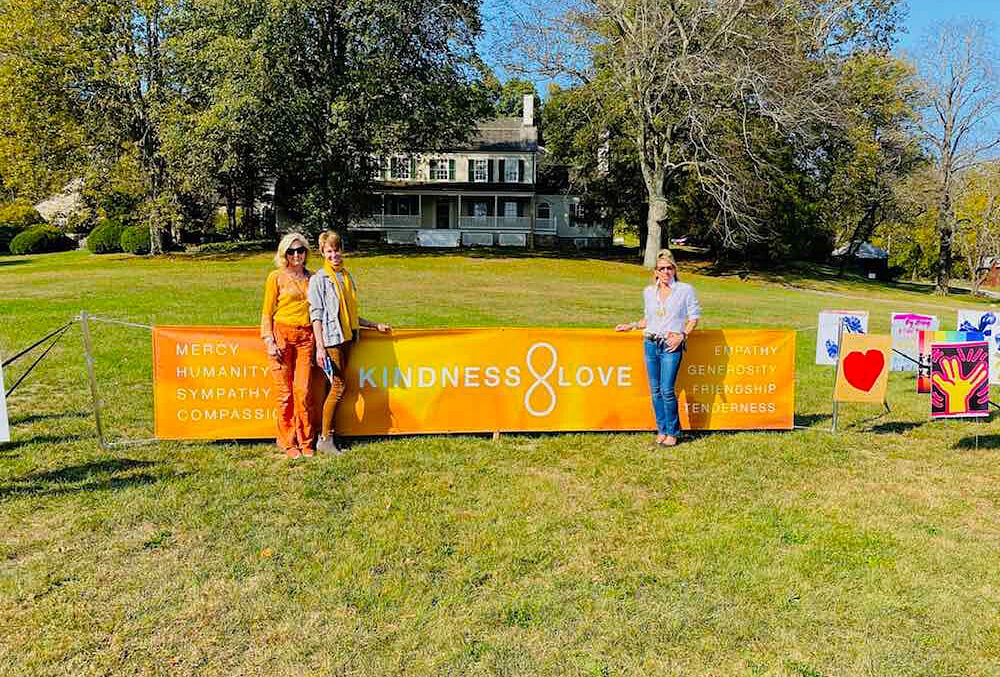 Vanessa Smith, Jane Millard and Liza Clymer are co-founders of the Kindness-Love Moment. 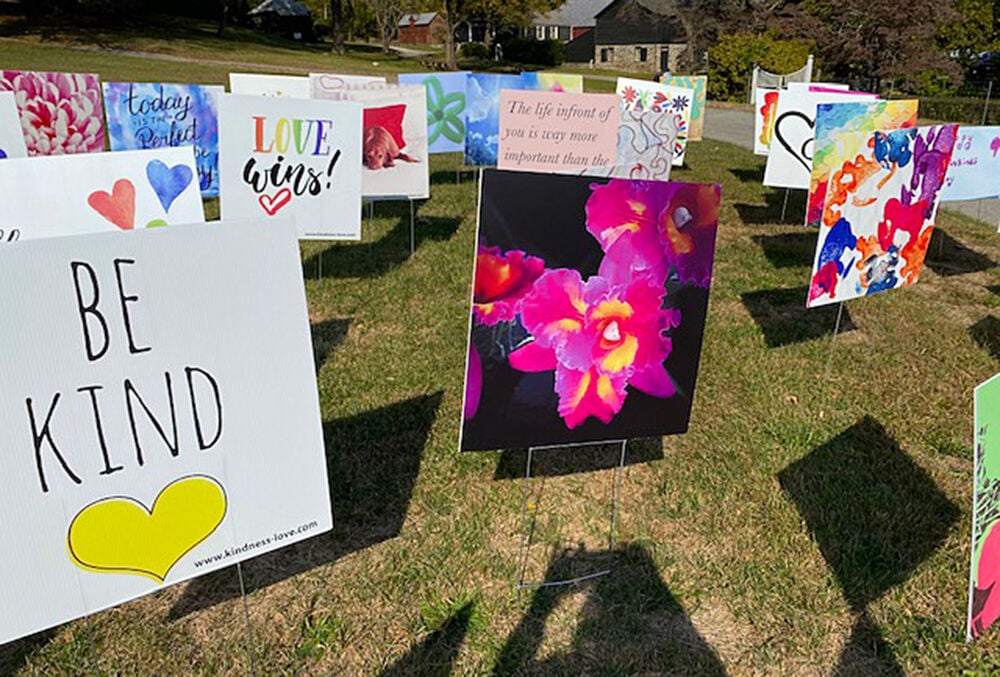 Some of the banners appearing around Bedford as part of the Kindness-Love Movement.

The artist behind recently painted buildings in Bedford and Pound Ridge is making a statement again, this time along with two compatriots.

Vanessa Smith, who was responsible for the Little Painted House on Route 22 and the painted former gas station in Scotts Corners in Pound Ridge, has joined forces with Liza Clymer and Jane Millard to found the Kindness-Love Movement. The results of their partnership can now be seen in banners that are appearing all around Bedford, with more being added constantly.

“I was in this sort of think tank with four women, called The Summit,” Ms. Clymer told The Record-Review.” According to Ms. Smith, The Summit was led by Sheila Crowley, a professional coach who helps women move forward with newly clarified career goals. And, as is common during our socially distant times, it was held entirely online.

“We were asked what our goals were, and we were supposed to come up with a challenge,” said Ms. Clymer. “Vanessa said, ‘Why don’t we do a banner that says Kindness and Love?’ And Jane said it should be a movement. I also loved the idea of a movement, and then I thought to put artwork next to it. I wanted to see what it looked like; I wanted to see what it feels like.”

The idea of putting together banners expressing the movement was born.

Ms. Clymer is thrilled with the friendship and partnership that began online. She just met Ms. Millard in person for the first time last week. “I call them my brilliant partners,” she said. “They come up with so many ideas. We started meeting from June on, and it just keeps evolving.”

They were inspired to create an art installation that is a way for people to come together through art. “The Kindness–Love Movement is an expression of community,” said Ms. Clymer. “It shifts the script to a movement of light. We want to show people how to live in color; we want the Kindness–Love Movement to be an expression of how to look at the world. Art creates empathy, harmony, understanding and joy. We should conduct our lives creatively.”

And, she said, anyone can get involved. “A kid, a grandmother, they can create something, and then we turn it into a banner. People need to tap into the place of kindness and love, so we get a chance to show it for a month or so. But the movement doesn’t stop. We keep adding to it. It’s constantly accumulating,” she said.

Their biggest presence right now is at John Jay Homestead in Katonah, which has the most banners installed, as well as the largest: an 18-foot-long banner. “It can be seen from the road, but you really experience it when you get close up,” Ms. Clymer said.

Another sizable installation is at George Bianco’s Maple Grove Farm, off Route 121 in Bedford, where there are banners on and alongside the barn. Perhaps the most visible location is the McDonald’s on Route 117 in Bedford Hills. “I know Brian Colley; he’s the McDonald’s franchisee in the area, and an artist himself,” said Ms. Clymer. Mr. Colley is a Cross River resident.

Ms. Clymer said she puts music on when she’s putting the signs in the ground, and it’s just a cacophony of color and sound. “Somebody said to me, ‘it’s stunning’,” she added.

Ms. Clymer began her career in advertising, casting actors in commercials, and then went on to produce television commercials for Revlon, L’Oréal and Macy’s. She and her husband raised their two boys in Katonah and have lived here for 26 years. Art has long been a big part of her life; she was a docent at the Solomon R. Guggenheim Museum in New York City for five years, and was also a partner Representative for the Garden Club of America. “I don’t garden. I’m really not a gardener, my passion is art,” she observed.

Ms. Millard is a professional artist and art therapist, who received her master’s degree in art therapy from New York University. She has practiced in London, England, as well as at several hospitals in New York, including NYU Langone Pediatric Intensive Care Unit. As an art therapist, she sees the value of creating art and using it to connect, express and bring people together. Her own artwork focuses on abstract expressionist paintings and a wide variety of photography.

Ms. Smith earned her bachelor’s degree in urban design from Stanford University, where she founded the Architecture Club, and then earned a master’s degree in anthropology from Columbia University. She has lived and worked in New York, India, Nepal, London and North Carolina as a producer and director, on feature-length films, documentaries, music videos and shorts. A BBC correspondent piece she produced was instrumental in helping free a 14-year-old from prison and helped change Nepalese law. As noted, her latest project is titled “loveitwhileitshere,” painting buildings such as the structure in Bedford Village on Route 22 that were about to be torn down.

With so much division in the world, Ms. Clymer said, the Kindness-Love Movement is a way of bringing people together. “It is not political,” she said. “It’s our hope that through the spreading of kindness and love that years from now, we’ll in a contemporary art business. In addition, she has spent the past three years as president of the Bedford Garden Club and is now on the national level as Zone III Awards

look back and only remember the good.”

Anyone can participate in the Kindness-Love Movement by creating artwork, poems, words or photographs that reflect or symbolize a “K-L feeling” and sending it in. It will be produced and added to the installation. Artwork can be submitted to the Instagram page at instagram.com/kindness8love.