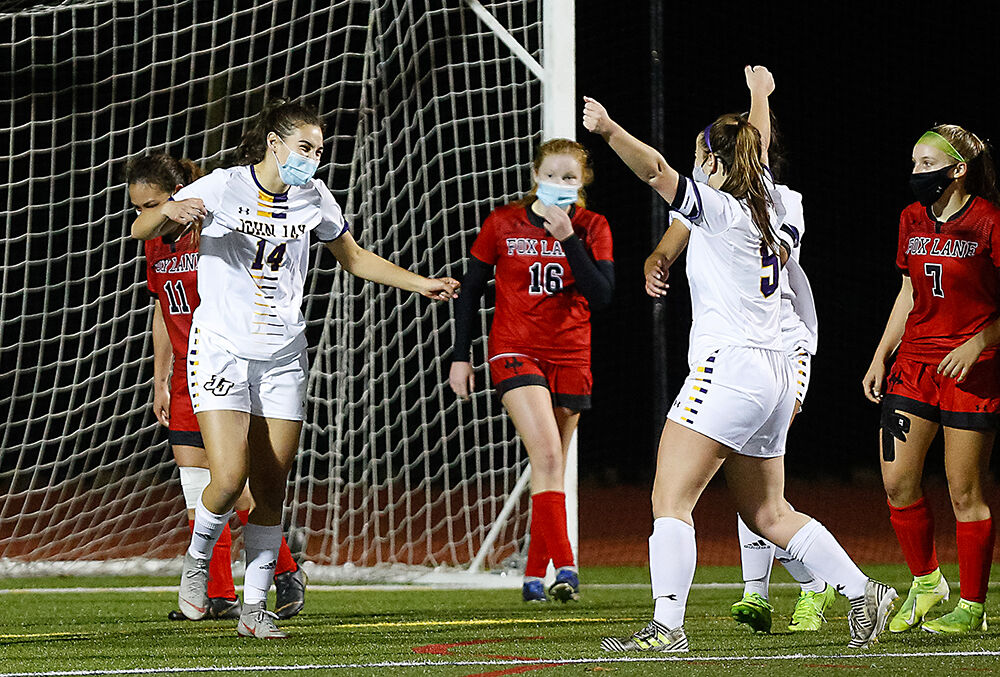 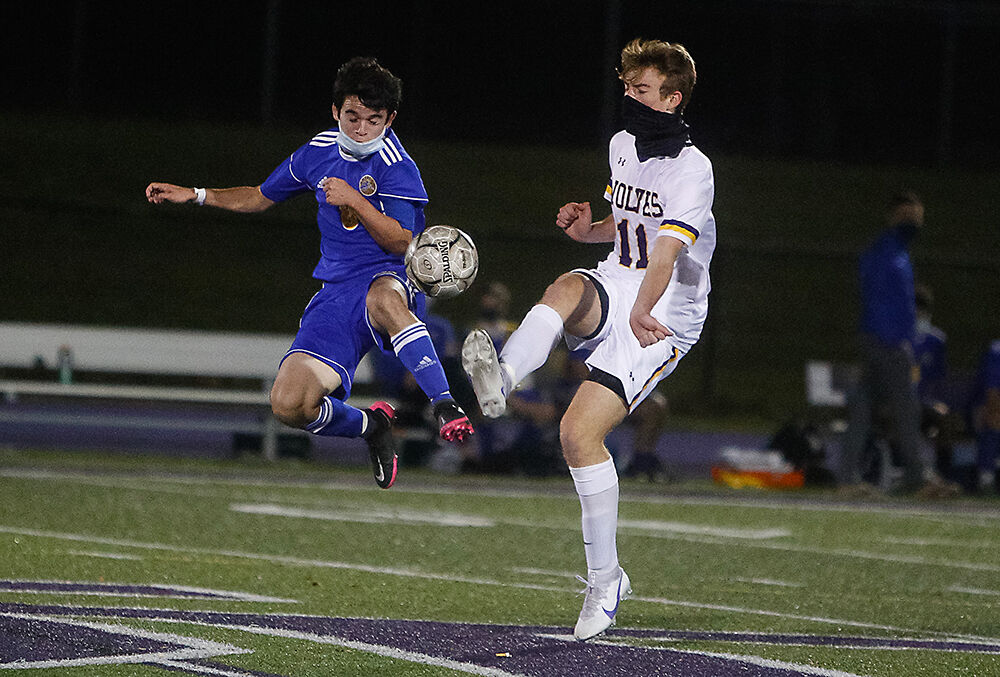 It probably felt like an eternity since the John Jay girls celebrated a goal.

In reality, it had been more than three full games as they headed into a Nov. 6 showdown with neighboring Fox Lane in Bedford under the lights.

Three successive scoreless ties were certainly weighing heavily on the minds of the Wolves.

And, with Fox Lane keeper Katie Abt and her defense doing yeoman’s effort throughout the opening 20-plus minutes of this game, the weight on the shoulders of the Wolves’ forwards surely was increasing.

Jay, though, controlled possession and had the ball in the Foxes’ defensive third for a large majority of time — and it finally paid off.

Drew DiGuglielmo chased down a loose ball on the right wing and let fly from about 17 yards out. The ball skittered along the turf and just past the right arm of a diving Abt on its way into the goal, just inside the left post and settling against the netting with 9:11 remaining in the opening half.

The drought was over.

Jay would add another goal before the intermission and tack on two more in the second half on their way to a 4-0 win over the Foxes.

Panzirer added an assist, while Brynn DiGuglielmo had two helpers and Maddie Slogoff one assist.

Jay had come into the contest at Fox Lane off a scoreless draw with visiting Yorktown Nov. 4.

In that one, for a third straight match and second time in three days, goals were impossible to come by in a John Jay girls’ soccer game. The squads battled to a scoreless draw. This contest came two days after the Wolves and Ardsley had played another 0-0 tie.

The scoreless draw streak began back on Oct. 23 in Chappaqua when and host Horace Greeley went toe-to-toe without finding the net. However, in the Nov. 4 match with Yorktown, each team did have their chances, but could not finish.

Just less than 18 minutes in, Jay’s Maddie Slogoff got off a shot from 20 yards out that was caught by Yorktown keeper Ciara O’Brien. The chance, though, seemed to light a bit of a fire under the Wolves who began to tilt the pitch a bit.

Shortly after the 20-minute mark mask break, O’Brien mishandled a clearing pass, the turnover resulting in a scoring chance for Jay, but the dribbled shot was easily snared by the Yorktown keeper as the game remained scoreless.

With a dozen minutes remaining in the first half, Slogoff attempted to slide a ball through to Mia DiChiara, however the feed just missed connecting and slid over the end line.

Yorktown’s first quality chance of the match came with about 10:30 left in the opening half when a long through ball down the right wing found the foot of Julianna Vano, whose cross was grabbed by Jay keeper Ilana Posner who ventured off her line to snare the ball.

DiChiara would get a chance with 3:40 to go before the intermission, but her header found O’Brien’s hands.

With the seconds winding down in the first half, Vano again found herself with an opportunity to get the visiting Cornhuskers on the scoreboard, but Posner would deflect the 35-yard rip out of harm’s way.

Just a shade under eight minutes into the second half, it was Vano again with a chance to break the scoreless stalemate. After working herself free from defenders, Vano’s shot sailed just wide of the left post.

Defenses began to rule as the match got deeper into the second half. Vano, who was Yorktown’s best offensive player throughout the match, looked poised to break down the Jay defense with a dozen minutes left, but the Wolves’ Katie Labriola was there with a tackle to separate the ‘Husker from the ball.

Scoreless through 80 minutes of regulation time, the teams would tangle for 20 additional minutes without reaching a decision.

Late in the first 10-minute extra period, Vano was at it once more — this time her 30-yarder missing its mark.

Less than two minutes into the second overtime, Vano was sent off with a yellow card, ending her evening. Without her, Yorktown was unable to press on offense.

The day after their win at Fox Lane, the Wolves returned home to Cross River and bounced Edgemont, 2-0.

Ella Kerman and Slogoff had the goals for Jay, while Brynn DiGuglielmo had an assist.

Ilana Posner pitched the shutout in goal for Jay, the team’s eighth of the season.

Meanwhile, Fox Lane girls soccer kicked off this past week with a 2-0 loss to visiting Rye Nov. 4.

Reilly Traynor had both goals for the victorious Garnets, who received five saves from Bell Jackson in recording the shutout.

Katie Abt was credited with a dozen stops in the Fox Lane cage.

Host John Jay closed out their week with a 2-1 loss in Cross River Nov. 9 to visiting Ardsley.

The home team led 1-0 at the intermission on an Aiden Oates’ goal.

Five minutes into the second half, Aidan Muldoon tied matters for Ardsley; then, 10 minutes later, Robert Watson’s header proved to be the winner.

Fox Lane fell in the final minute of regulation to visiting Ossining, 2-1, Nov. 4.

Luis Castillo converted the rebound of a saved penalty kick by Kevon Evans to provide Ossining with the winning margin. Fox Lane’s Evan Newberg, playing in goal for the injured Charlie Della Penna, made the initial stop on the PK, but Castillo beat everyone to the rebound.

Evans had scored earlier in the second half to give Ossining a 1-0 lead, but James O’Dwyer netted the tying tally for the Foxes with nine minutes remaining.

“The boys came ready to play and for 80 minutes put in maximum effort,” Fox Lane head coach J.R. Pouncey said. “We created some offensive threats and were reward in the second half with a goal by James O’Dwyer. Our defense remained steadfast and kept Ossining at bay for a majority of the game.”

He continued, “Ossining is a talented group with some offensive weapons. They were able to capitalize on an unfortunate call with only seconds left in the game. Due to injury, Charles (Della Penna) did not play, (but) Evan Newberg stood in his place and did a fantastic job keeping us in the game.”

The Foxes traveled to Rye two days later and fell to the undefeated Garnets, 3-0.

Marko Kecman and Milton Mancias-Magana gave the host Tigers a 2-0 halftime advantage; while Ariel Solano added an insurance goal late in the second half.

Trevor Fraiolo had the lone goal for Fox Lane.

The Foxes remained winless this season at 0-8-2.