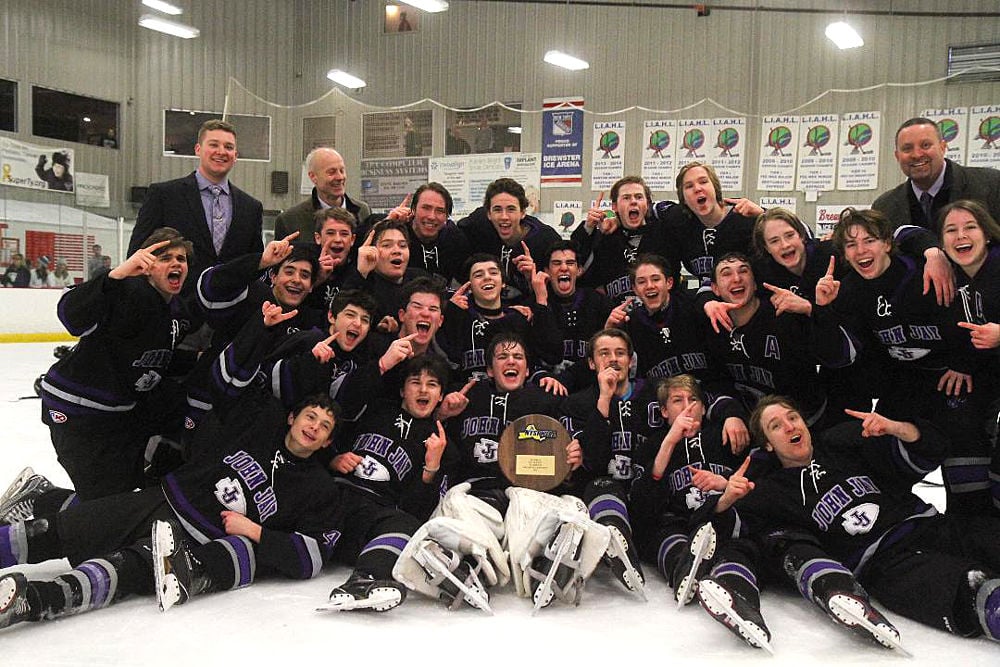 Alex Smith celebrates with his 2018-19 team after upsetting Pelham to win the D-2 sectional title. 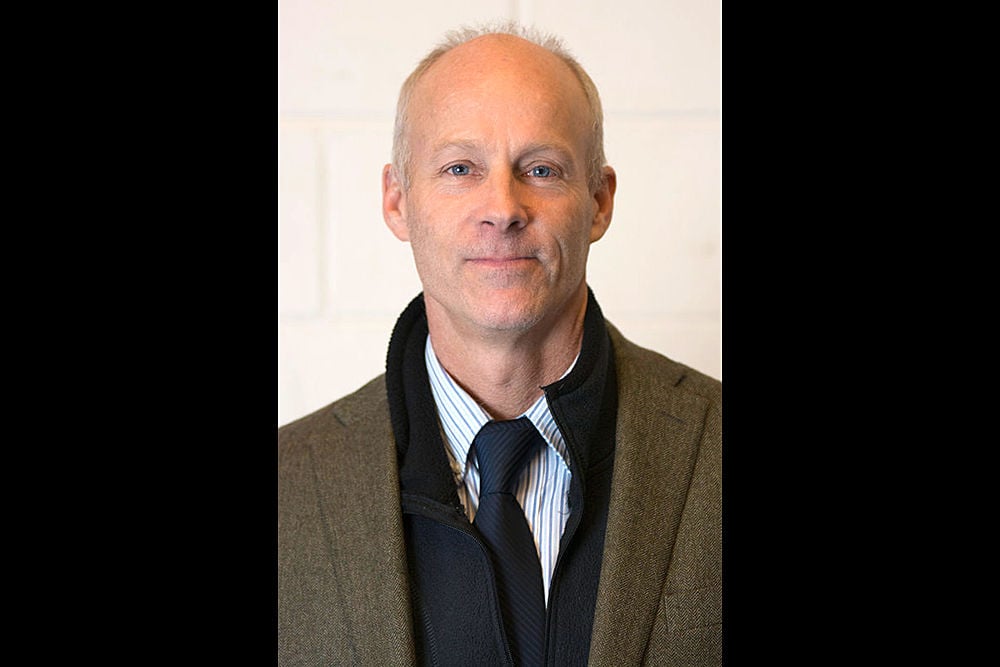 John Jay hockey coach Alex Smith, who is retiring this year, knew this time would eventually come, but it still didn’t make it any easier.

“When they posted the job, it finally hit me  —it became a reality,” Mr. Smith said.

The posted job was for the head coach of the John Jay ice hockey team. Since 2009, Mr. Smith has held that position, and has been highly successful, as evidenced by Section I/Division 2 championships in 2013, 2018 and 2019. Each of those seasons ended with trips to the state final four, including a loss in the state final in 2013.

He is also retiring as a history teacher in the district, a post that he also held since coming to the Katonah-Lewisboro School District from Dobbs Ferry in 1995.

“I think that one of the greatest advantages that a coach can have is to be able to see the kids each day,” Mr. Smith said. “I would see them and talk about the academic side of things and anything else that would cross their mind.”

He continued, “Being retired and not being able to see the kids every day -- I just didn’t think that would be a good match for me.”

Mr. Smith’s hockey roots go back to growing up in Rye in the 1970s when the Garnets were a Section I powerhouse in the sport. Mr. Smith, a 1980 graduate of Rye High School, played goalie for the Garnets. In the spring, he played first base for the baseball team.

“As the goalie, I did see the entire ice, but I didn’t really think that coaching would be part of my career,” he said.

He attended Syracuse University where he picked up his undergraduate degree; then moved on to American International College to do his graduate work. While at AIC, he served as the graduate assistant coach. In all, Smith has been coaching hockey at one level or another for more than 30 years.

“I got lucky at AIC. We won the D-2 ECAC championship and, at one point, I started thinking that maybe I could make coaching my full time profession,” Mr. Smith said. “I was lucky to get into the college coaching fraternity, but I learned pretty quickly that it was really an all-encompassing job.”

He added, “I knew that I wanted to have a family and the job description of a college coach just didn’t match up with that plan.”

Mr. Smith took jobs at Cape Cod’s Sandwich High School and moved onto the Brunswick School in Greenwich, Connecticut, before landing at Dobbs Ferry in 1991.

In 1999, the Friends of John Jay Ice Hockey was born — and Mr. Smith’s life would not be the same.

“Actually, it was pretty easy at the start in that first year,” Mr. Smith said. “A group of parents wanted high school hockey and they did all the work. The table was set when I came on board.”

He continued, “That first team that we had was actually pretty good (because) the kids had all played youth hockey. It was not like I was running around doing all the background work. We hit the ground running.”

Even if they were “pretty good,” the first season ended with a hard lesson.

“Back then, there was only one division in hockey and the top 16 teams in the section qualified for the post-season,” Mr. Smith said. “We snuck in as the 16-seed and we had to go down to the Ice Hutch to play Pelham first. They beat us 10-0 and it easily could have been 20-0.”

Pelham, he continued, was “so far ahead of us and we knew that they were who we wanted to be like. It took a while, but my second time around is when we started to be like the Pelhams. We were able to compete with the teams upstate and make it out of the section and compete for state titles.”

Mr. Smith coached the Jay program from 1999 through the 2002-3 season, then took seven seasons off before returning in 2009.

“I was lucky to have such great kids, kids that wanted to be successful,” Mr. Smith said. “We put in a relatively simple plan: defense first. The year before I came back on board, the team was 4-20 and the kids were all eager to get back on the winning track.”

He continued, “We had some success that first year. That was important because the kids had bought into what we were telling them and we won. The best way to get a program successful and to keep it at a particular level is to keep winning.”

Mr. Smith also cited the commitment from his players and their families.

“The kids take great pride in wearing the John Jay colors,” he said. “I know that these kids and their families have made sacrifices with all the travel time they put in so that they can play with all these different teams. That commitment has really impressed me through the year.”

Over his coaching years at John Jay, there have been so many highlights. Still, some have a way of standing out.

“The (Mike) Fischetti goal,” Mr. Smith said, referring to the 2017 double-overtime 1-0 sectional semifinal win over Byram Hills when the player’s shot from the left half boards snuck past Byram Hills goalie Grace Lunder’s left side with 4:27 gone in the second overtime period. “Mike was not an offensive machine, so I will always remember that,” Mr. Smith said.

Then there was “the first time we went up to Utica and we were down to St. Lawrence in the semifinals and we scored five goals in the last 7:30 to win. You could have not seen a more unbelievable 180-degree turnaround — we were toast.”

Jay entered the third period of the 2013 state semifinal versus St. Lawrence trailing 4-1. They ended up winning the game 6-4. The next afternoon, they fell 4-2 to Christian Brothers Academy/Jamesville-DeWitt in the D-2 championship game.

Another standout memory was “the sectional title win at Sport-o-Rama (in 2018) against Pelham. Not too many people expected us to be there and, when we got there, not too many gave us a chance against them,” Mr. Smith said.

But, with a 2017-18 roster that included seven freshmen, five sophomores and six juniors as well as five seniors, the Indians accomplished what many prognosticators were saying was out of the question — repeating as Section I/Division 2 champions.

“All of our successful seasons, we had the same ingredients,” Smith said. “We were healthy, we got good, clutch goaltending and we had clutch, timely scoring.”

His advice for his successor, “Be your own person. Coach to your personality — the kids will adapt.”

Mr. Smith added, “Appreciate the position that you are in. The boosters and the community are great.” And finally, he said, “Take the time to enjoy it. I will always take away from it how much fun that I had. Every time out was a special event. I was in a special club and I will remember these moments for the rest of my life.”