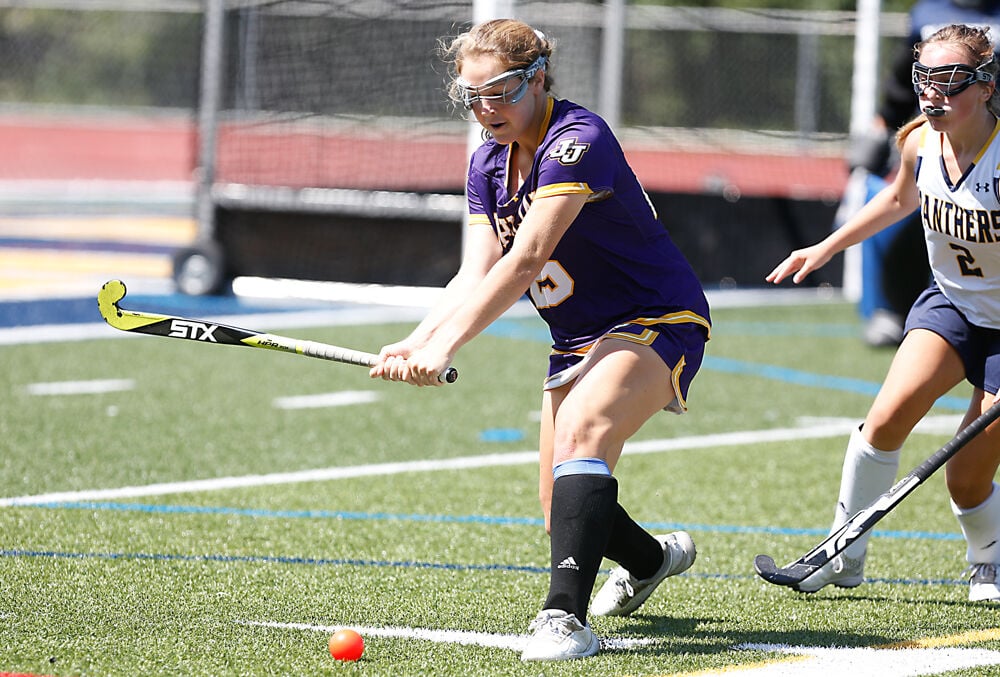 Annabel Brennan scored four goals to lead the Wolves to a 7-0 win over Walter Panas. 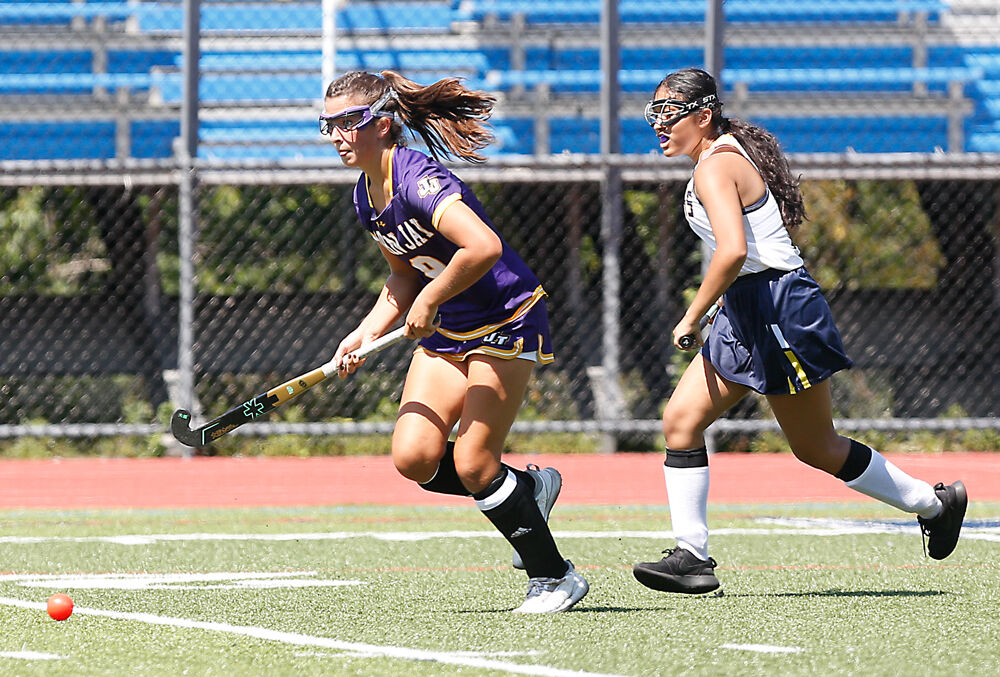 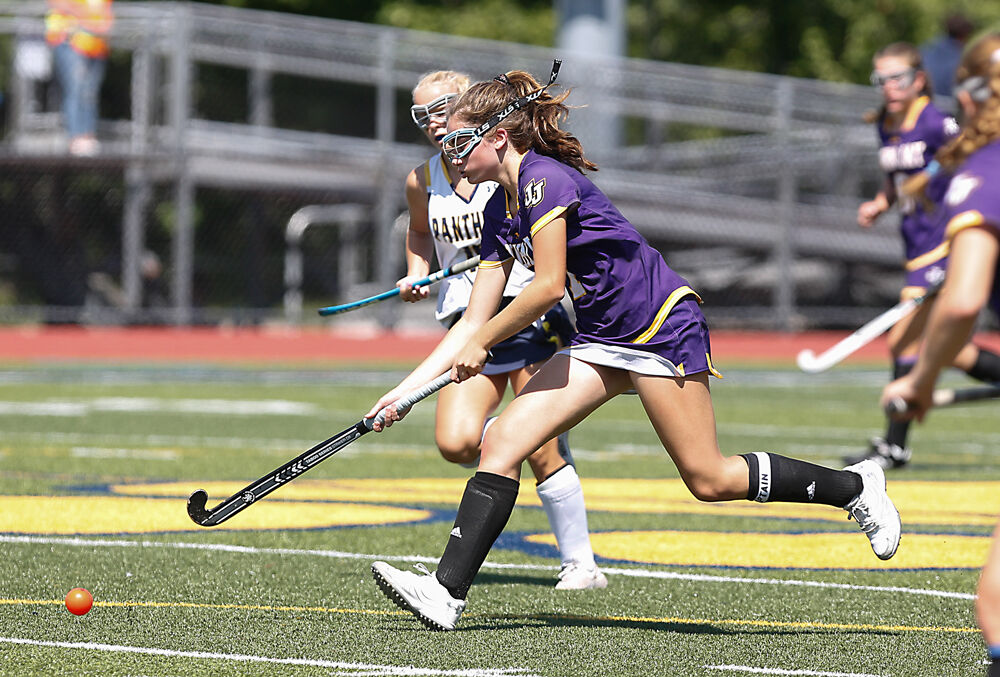 The Wolves’ Sophia DiFalco heads toward the goal. 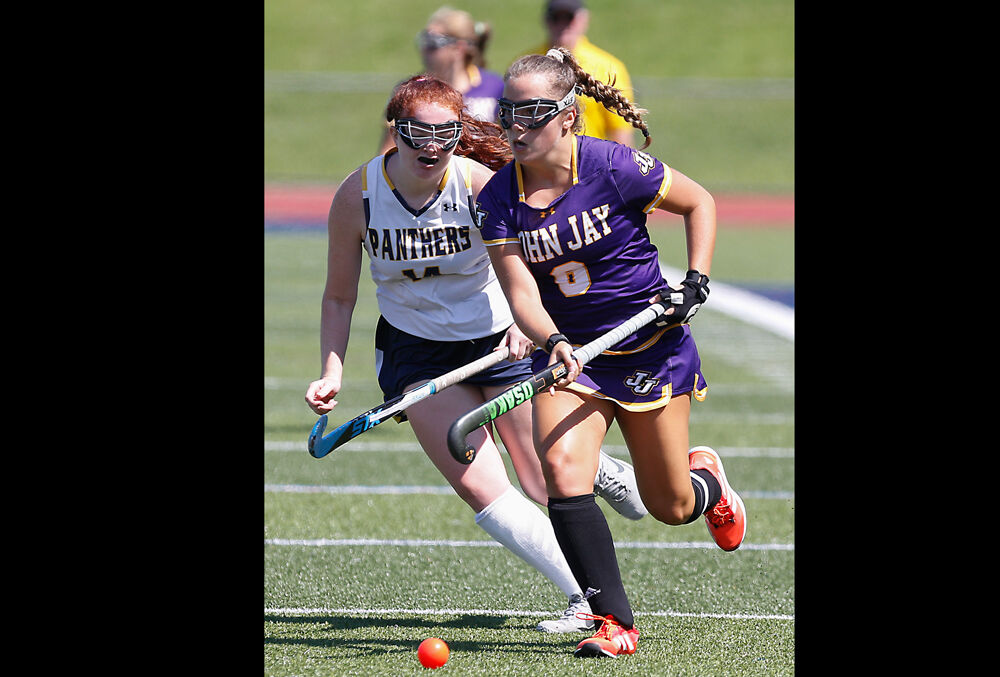 Annabel Brennan scored four goals to lead the Wolves to a 7-0 win over Walter Panas.

The Wolves’ Sophia DiFalco heads toward the goal.

For a span of four minutes in the fourth quarter, John Jay junior forward Annabel Brennan made it look easy. Brennan scored three goals in less than four minutes, and she finished with four goals overall to lead the Wolves field hockey team to an impressive 7-0 shutout victory on the road at Walter Panas in the season opener Sept. 4.

John Jay controlled the action and opened up a 3-0 lead in the first half, but it was the fourth quarter when the Wolves dominated as senior captain Kate Mercer kept feeding the ball to the front of the net and Brennan was there to bury it in the goal.

“It happened pretty quick,” Brennan said of her fourth-quarter hat trick. “The first half we had so many shots on goal and they just weren’t falling. Definitely in the second half we figured out our passes, and our ball movement was great. Kate and I have great chemistry and we seem to find each other on the field really well.”

John Jay coach Debbi Walsh was impressed with her team’s performance, especially considering it was the first game of the year.

Especially considering the way Panas goalie Kate Astrab was playing as she made it difficult for the Wolves to score goals in the first half.

“For the first game I’m pretty happy,” Walsh said. “I wanted the girls to come out with all their intensity. I told them that when the season starts you have to set the bar where you want to be and I asked them to set it high. They came together and were aggressive immediately. We saw a phenomenal goalie on their team that challenged us, so we had to mix it up in the second half in order to score.”

In the first half, Brennan opened the scoring with her first goal of the game, and John Jay then got goals from Mia Puccio and Sophia DiFalco to build a 3-0 lead at the half.

The Wolves kept attacking the goal and dominating possession, but Astrab kept the Panthers close with her performance in goal as she finished with 21 saves.

Puccio got the Wolves going in the second half as she scored her second goal of the game to make it 4-0, and then Brennan and Mercer took charge.

Mercer made her move up the right side and crossed it to the middle where Brennan was ready as she fired it into the back of the net to make it 5-0 at the 4:22 mark.

Less than a minute later it was like déjà vu, the exact same play as Mercer led the fast break taking the ball down the sideline before passing it to Brennan for another goal at the 3:45 mark of the fourth quarter.

They did it again at the 1:45 mark as Brennan scored her third of the quarter to make it 7-0.

John Jay goalie Maeve McGroary was not under pressure as she didn’t need to make a single save in goal as her defense in front of her kept the ball in the Panas half of the field.

John Jay is a veteran team with 14 returning varsity players from a squad that finished 8-3 last year. Walsh feels the Wolves are capable of having a great season. Leading the way will be senior captains Zoe Eliades, Mercer and DiFalco. Eliades is a four-year varsity player, while Mercer and DiFalco are both in their third season on the varsity.

In addition to the three captains, juniors Brennan and Puccio are both three-year varsity players who will play a big role on the offense. Walsh will also be counting on junior returning starter Meghan Condon to help anchor the defense, along with freshman newcomer Jojo Degl, who should be seeing a lot of playing time.

“We do have a lot of experience and a lot of depth,” said Walsh. “We’ve got some very strong seniors and a talented group of juniors. Our three captains provide great leadership and they are all very skilled players.”

Eliades was all over the field at Panas, controlling the ball for John Jay from her center back position.

“A 7-0 win is a good way to start the season with a shutout,” Eliades said. “The second half we really came together working on our ball movement. We’re just learning each other’s strengths and figuring out where everybody is on the field. We have to keep building on that. It was a great way to start out.”