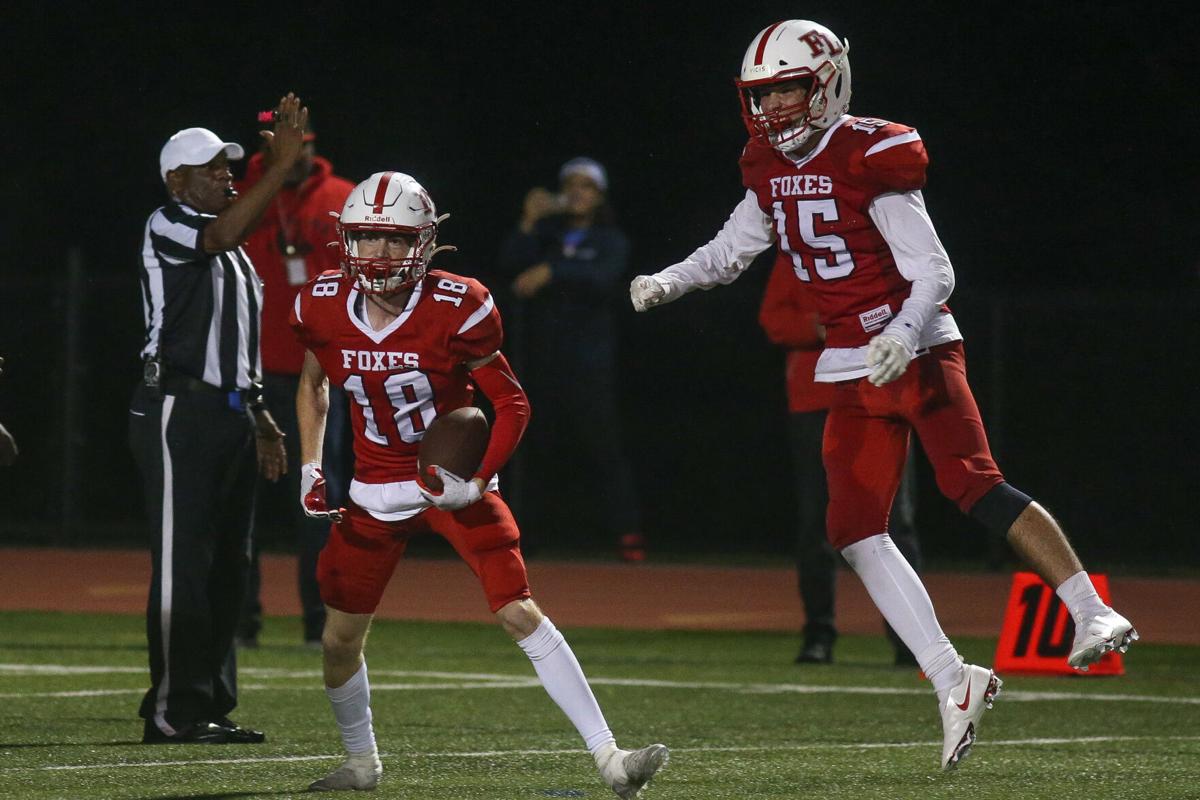 Fox Lane’s Luke Feingold, left, celebrates with Luke Steger after recovering a Yonkers Force fumble in the final minute of the fourth quarter. 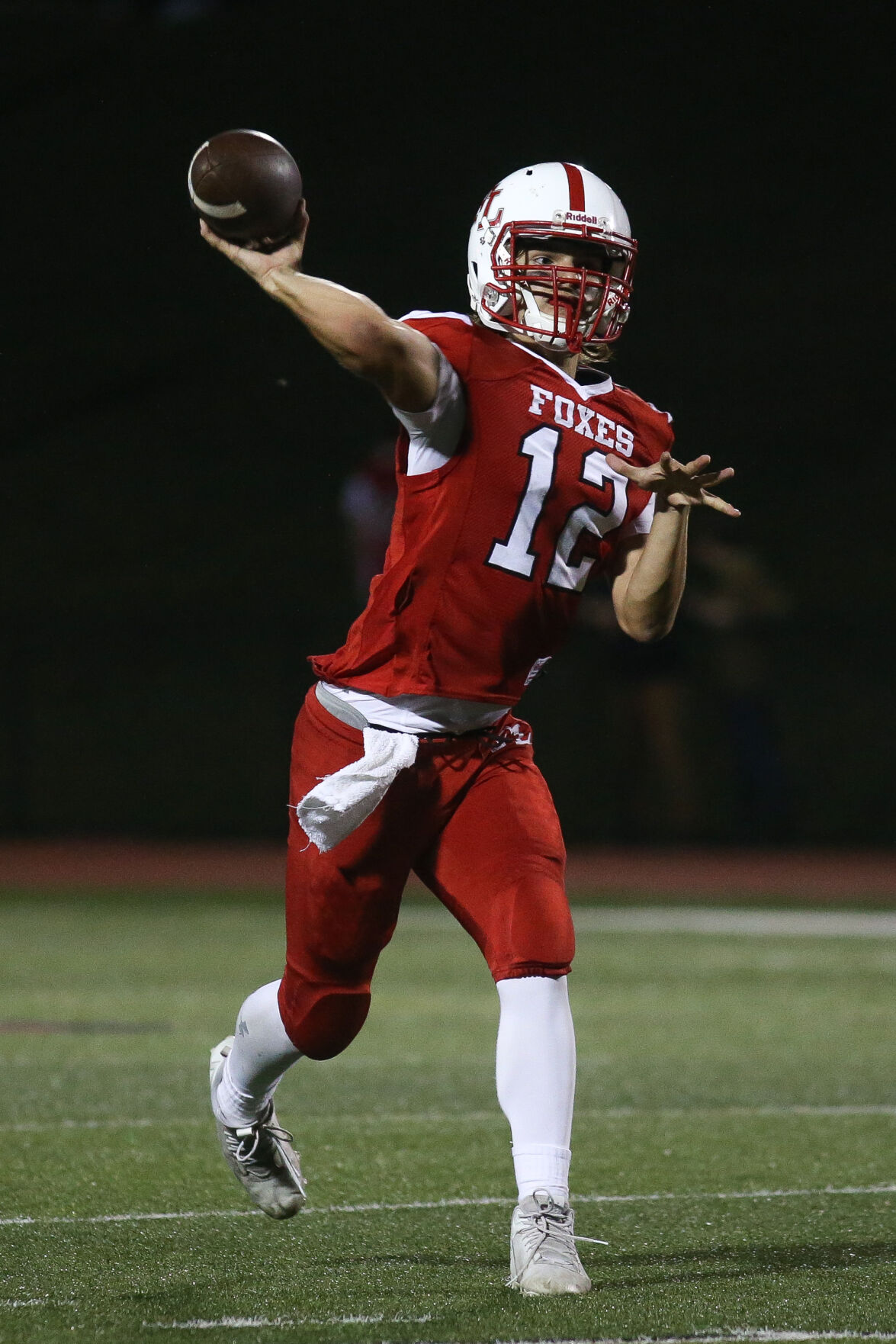 Fox Lane’s Luke Feingold, left, celebrates with Luke Steger after recovering a Yonkers Force fumble in the final minute of the fourth quarter.

It wasn’t looking promising for Fox Lane as the Yonkers Force, trailing by five points, methodically drove down into the Foxes’ end of the field late in the fourth quarter Oct. 2.

After the Force got inside the Fox Lane 10-yard line, a host of Fox Lane defenders stopped a Yonkers run inside the 1-yard line on third down, setting up a pivotal fourth down with the game on the line with 40 seconds remaining. The snap was high and got away from Yonkers quarterback Atticus Oelkers. Foxes senior Luke Feingold pounced on the fumble before you could blink as a spirited celebration began.

Fox Lane was able to kneel it out and held on for a thrilling 19-14 win over the visiting Force in front of a large homecoming crowd.

“We had the timeout right before and coach (Andrew Giuliano) set up the game plan and sent me in for a blitz,” Feingold said. “They messed up the snap and I jumped on the fumble. It was just perfect and it all went together.”

He continued, “There are big plays (in a game) and you’ve just got to keep your composure. If there’s a big play, you’ve got to wipe it off and move on to the next play. It’s all about right now and what’s important now.”

In the practice week leading up to the game, Fox Lane coach Andrew Giuliano and his staff preached to the team: “If we’re in a big moment, how can we step up?”

Feingold and the Foxes answered the bell.

“I pulled the team over when we were kicking off and I said, ‘Guys, we just need to be mentally prepared for any situation that’s going to come forward,’” Giuliano said. “And everyone kind of rallied around each other and it showed on the last play that we were able to make a stop. An errant snap sometimes goes your way. We had some bad things go for them and that one went for us.”

Yonkers marched 78 yards on 11 plays over the final seven minutes to set up the pivotal play at the goal line.

“We knew this team was going to be tough,” Giuliano said. “People think what they want to think about Yonkers but we know what we saw on film and it’s a tough school we played against. We knew they were playing hard and we knew they didn’t give a damn who we were.”

Fox Lane fell behind 14-7 midway through the third quarter, but fought back to pull the game out. Late in the third quarter, the Foxes faced third-and-long, but senior quarterback Eric Miller dropped back and fired a pass into the waiting arms of a streaking Feingold on a 43-yard touchdown route. The extra point was blocked and the Foxes still trailed 14-13 with 59 seconds left in the quarter.

“We knew we were the better team,” Feingold said. “We just had to clean up the mistakes. We had to just play Fox Lane football.”

Fox Lane took an early lead on a Miller 1-yard touchdown run with 3:38 left in the first quarter. Matt Antolino booted the extra point through the uprights for the 7-0 advantage.

The Force responded with a touchdown of their own and a two-point conversion run to take an 8-7 lead with 4:07 left in the second quarter.

Fox Lane was inside the Yonkers 10-yard line with under a minute to play in the first half, but fumbled and the Force recovered.

“We definitely had opportunities to put it away early and we didn’t capitalize,” Giuliano said. “We continue to struggle with holding onto the ball. That’s always scary, and it’s stuff we have to work on. We have guys who can make plays. We’ve just got to finish.”

Yonkers took a 14-7 lead midway through the third quarter on a 1-yard touchdown run. But the two-point conversion pass attempt was incomplete.

Miller passed for 94 yards and also rushed for 55 yards on 10 carries in the win. Pedro Silva ran for 61 yards on six carries and caught a 43-yard pass. DeBono rushed for 50 yards on 14 carries.