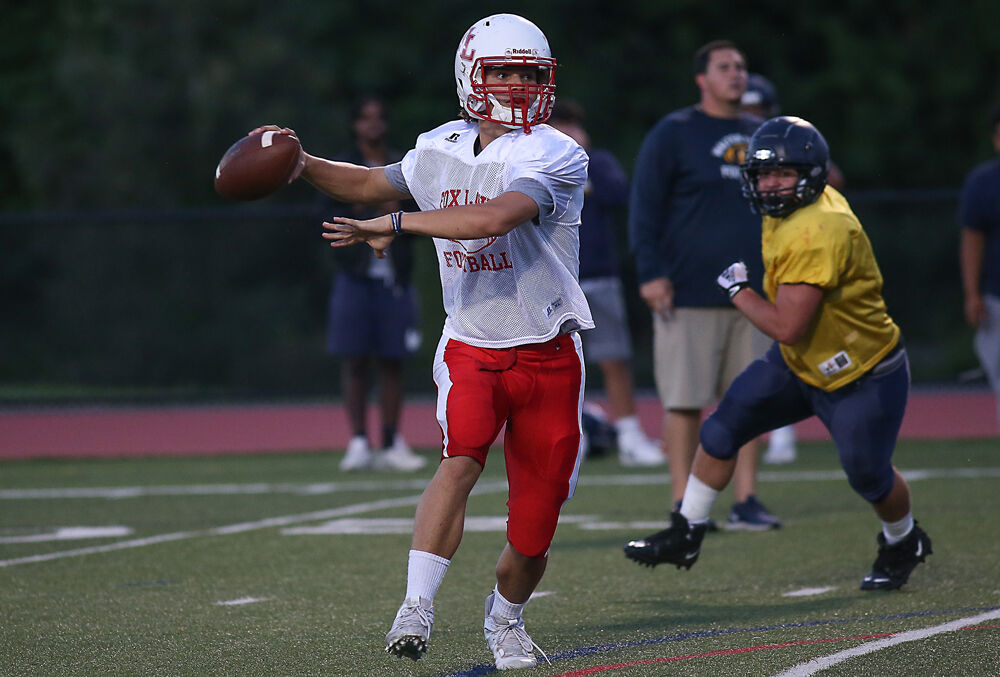 Senior quarterback Eric Miller throws a pass at a scrimmage with Panas. 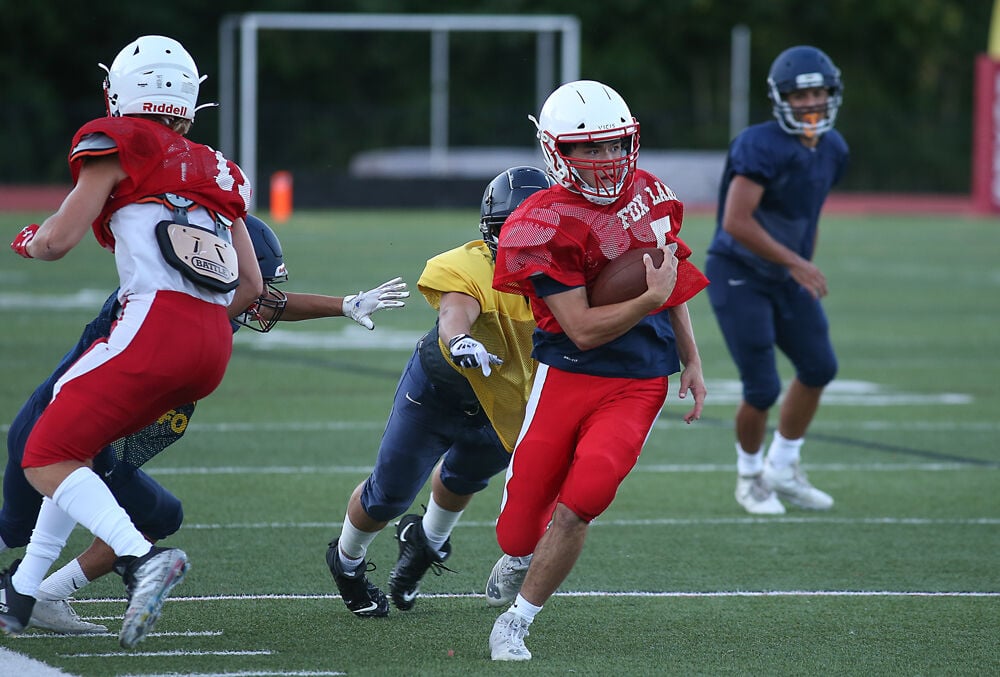 Junior Max Guyder is a key newcomer for the Foxes.

Senior quarterback Eric Miller throws a pass at a scrimmage with Panas.

Junior Max Guyder is a key newcomer for the Foxes.

Bill Broggy was a staple on the Fox Lane sideline for years, but the veteran coach retired after last season and was replaced by Drew Giuliano, who had been an assistant coach with the program since 2011.

“Taking over the position from coach Broggy is no easy task,” Giuliano said. “He has been doing this for so many years and has so much experience. He’s also had great success and at multiple schools.”

“I can confidently say he is the smartest football mind I have ever been around,” Giuliano said. “That being said, we still have a solid staff with assistant Chris Lounsbury, who has been with them for years and head coached in Dover as well. He has a great mind for football and the kids love him. Coach (Kyle) Villaronga moved up from JV and we’ve also added Matt Morgante, who played high school ball for Coach D (Tony DeMatteo) at Somers, college ball at Hobart and Cortland, and coached at Byram Hills last year. So, he has been a part of nothing but successful programs, and he’s already making an impact with us.”

Giuliano, who has been around football basically from birth, inherits a Fox Lane squad that finished 2-4 during a pandemic-shortened spring season.

“My fall has been dedicated to football ever since I first suited up in youth,” Giuliano said. “I have a beautiful wife and two boys, and without their support I would have never attempted this new venture. It is tough, it is a lot of work, but it has been very fulfilling so far.”

He continued, “My philosophies are simple: be committed, hold yourself and your teammates accountable and play with no excuses. I don’t have many changes to what we’ve been doing schematically, however just really hammering those principles is what I would love to build on.”

The Foxes are also looking to “establish unity and culture within the program,” Giuliano said.

The quarterback spot is a battle between last season’s starter, senior Eric Miller, and fellow senior Jack Travis, who was the backup in the spring.

“The quarterback battle is an ongoing and even battle thus far,” Giuliano said. “Eric has shown us some great things and he started for us all spring. He can really chuck the long ball and he loves playing the game. Literally, he would play any position. However, Jack Travis has really stepped up and has some other attributes which make him special as well. They are both aware that it is an even battle and both are constantly taking reps with the [first-team offense] and competing. Jack started our scrimmage against Panas and did well, and Eric came in and did equally as well, as anticipated. I envision both having roles throughout the year.”

Senior Noah Bernero (fullback/safety) returns to the program after a season at Stepinac. He started as a sophomore for a Fox Lane squad that won six games. Giuliano called his return a “surprise” and he’s been “nothing but a pleasure to work with.” Bernero is a ball hawk on defense and always in the right spot making plays, Giuliano said.

Senior Logan Matson is a three-sport athlete who Giuliano says, “loves competition, embraces a challenge and is someone who can make big plays down field.”

Key players on the offensive and defensive lines include senior Marc Berisha, senior Will Hoyt and sophomore center Brian Bailey. Berisha, who missed his junior season due to injury, is also a wrestler who Giuliano expects big things from.

Another key returning player is senior Will Shepherd, who lines up at tight end and linebacker. A trio of junior newcomers expected to make impacts are Roan Guyder (offensive line/linebacker), Max Guyder (running back/safety) and Charles Hoyt (fullback/linebacker).

Giuliano feels that he has a well-balanced team where, for the first time in a while, a number of different athletes can make a play.

The team goals start out with winning week one and that first game comes against league opponent Roy C. Ketcham on the road tonight, Friday, at 7 p.m.

“I am excited to get things going,” he added. “The kids are excited as well. We have a well-mixed schedule that should provide us with some competitive games. I also think a league title is something in our reach if we play our style of football and play clean football.”