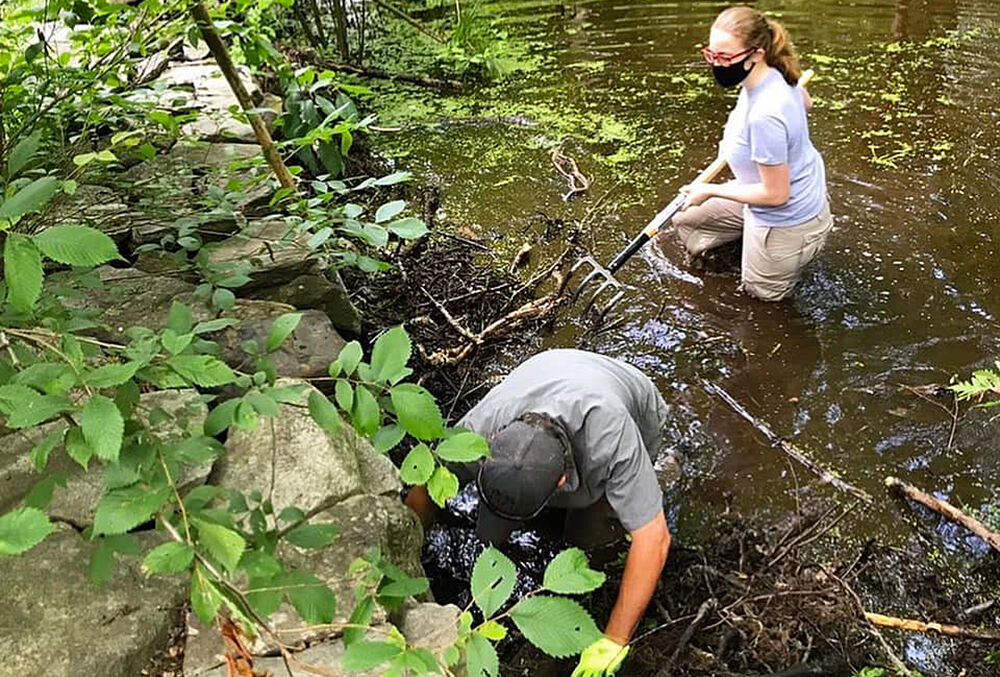 Beaver expert Dan Aitchison and WLT’s Preserve Manager John Zeiger work with Sam, a local college student and WLT volunteer, to notch the beaver dam so they can study water levels, in preparation for adding a beaver baffle. 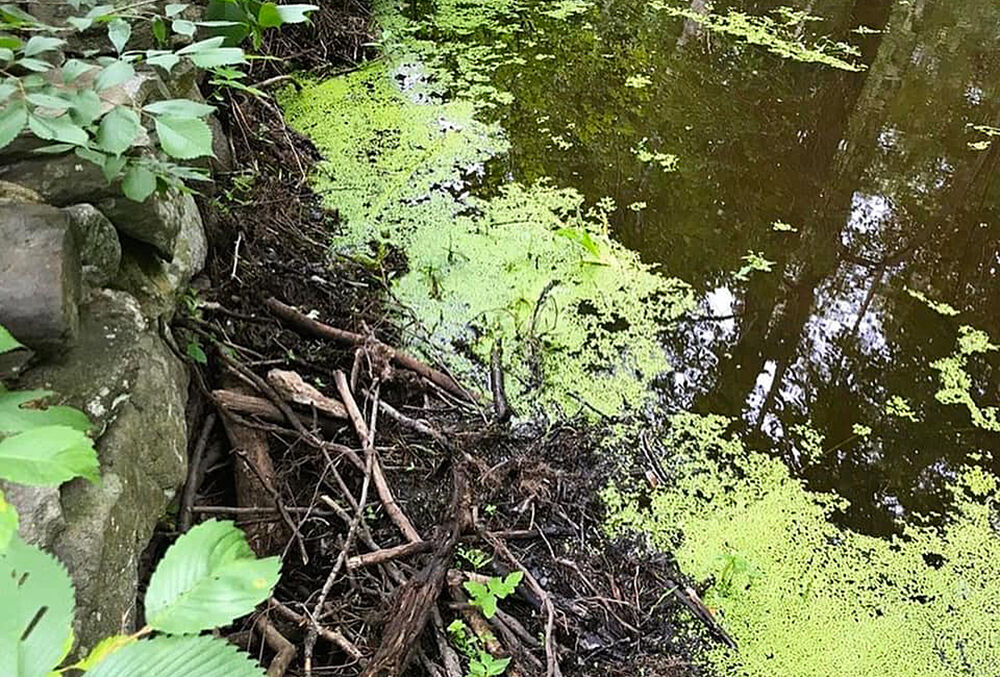 The small dam, believed to be home to a single beaver, has flooded over 10 acres of the Zofnass Preserve.

Beaver expert Dan Aitchison and WLT’s Preserve Manager John Zeiger work with Sam, a local college student and WLT volunteer, to notch the beaver dam so they can study water levels, in preparation for adding a beaver baffle.

The small dam, believed to be home to a single beaver, has flooded over 10 acres of the Zofnass Preserve.

Here’s the thing about beavers — they’re not very subtle. Their ability to alter the environment is nearly unparalleled in the animal kingdom, so when one of the semi-aquatic creatures comes around, it’s hard to miss.

That was the case in early April when a Westchester Land Trust volunteer was walking on one of the main trails at the Westchester Wilderness Walk/Zofnass Family Preserve and suddenly found herself inundated by flooding on the path. She quickly informed the WLT staff.

“If you’re walking the main loop by Upper Shad Road it’s incredibly obvious,” Preserve Manager John Zeiger said. “We initially thought it was rainwater, but when it didn’t go away, we did more investigation and that’s when we found the dam by the stone wall.”

That small beaver dam has since flooded approximately 10 acres of the Zofnass Preserve, transforming the habitat and bringing new biodiversity to the area. While the presence of new wildlife is exciting, it also presents complications.

“While we’re really happy the beavers are coming back, we’re really concerned for our trails,” Mr. Zeiger said.

The area affected by the dam is considered the Western Loop Trail and one of the most visited parts of the Zofnass Preserve. It is home to a unique wetland environment and hearty forest. If WLT can’t reduce the size of the pond created by the beaver dam, it could risk losing thousands of trees in that habitat.

“We’d like to reduce that loss to hundreds. We’d like to basically strike a balance with the beaver,” Mr. Zeiger said.

The Pound Ridge Land Conservancy found itself in a similar position about a year ago. The PRLC found a beaver dam on its Olesen Preserve, which subsequently flooded land being considered for trails. As a conservation organization, the group ultimately turned to an expert for advice on how to minimize the damage and live in harmony with their newest tenant.

Both the PRLC and the WLT consulted Dan Aitchison, wildlife curator for Westchester County Parks and the county’s resident beaver expert. Mr. Aitchison has more than 10 years of experience with the remediation of beaver environments, using devices like the “beaver baffle.” This creation uses a pipe that penetrates the dam, enabling the water level to recede while tricking the beavers into believing that their dam is intact. It is also known as a “beaver deceiver.” None of these devices cause harm to the beaver or their habitat, Mr. Aitchison said.

At the Zofnass Preserve, the WLT does have two other modes of recourse. One is to do nothing and let nature take its course. Another is to bring in trappers to remove the beavers. Live trapping and relocation are not allowed in New York, so the solution would need to entail lethal trapping. While this might seem like a quick fix, trapping is not only controversial but can wind up being expensive.

“If beavers found that area before, there’s a high likelihood more beavers will disperse from the same or a nearby colony and come there again,” Mr. Aitchison said.

With a beaver baffle, culvert protector or similar flow modification device, there is less chance of attracting more beavers to the site. Instead, this approach is seen as creating a balance in the environment between people and beavers.

Right now, the Westchester Land Trust is still weighing a decision to go through with installation of a beaver baffle on the Zofnass Preserve. Mr. Zeiger said he’s still studying water levels on the preserve to determine if flow modification will be effective. In the meantime, he’s already brainstorming new educational opportunities at the Zofnass Preserve centered around beavers.

“I would like to educate the public on how the habitat is changing. It’s a natural process and the beavers have a right to be here, but it’s going to be a balancing act,” Mr. Zeiger said.