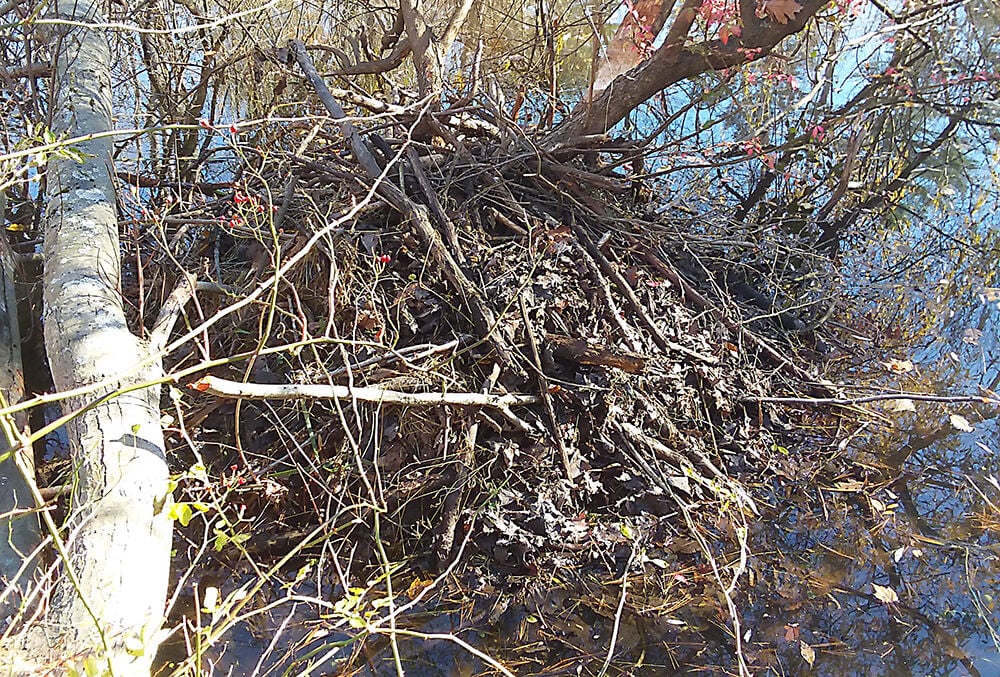 The new beaver lodge at Halle Ravine, likely home to a kit from the Olesen Preserve colony. 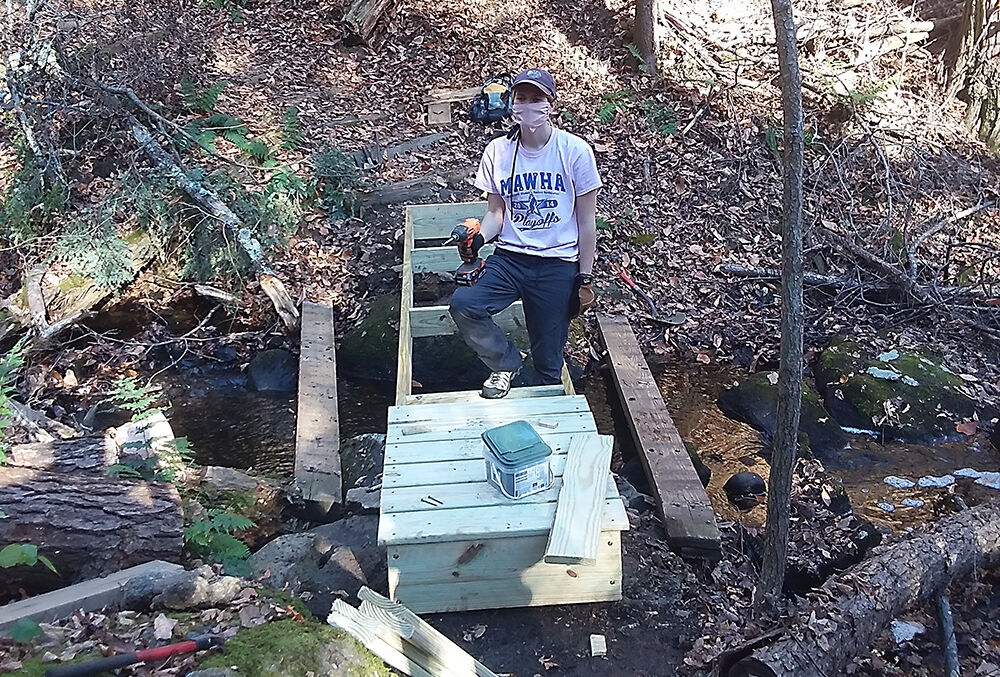 Halle Vernon, pictured, was one the volunteers building a new replacement bridge on the Halle trail system. 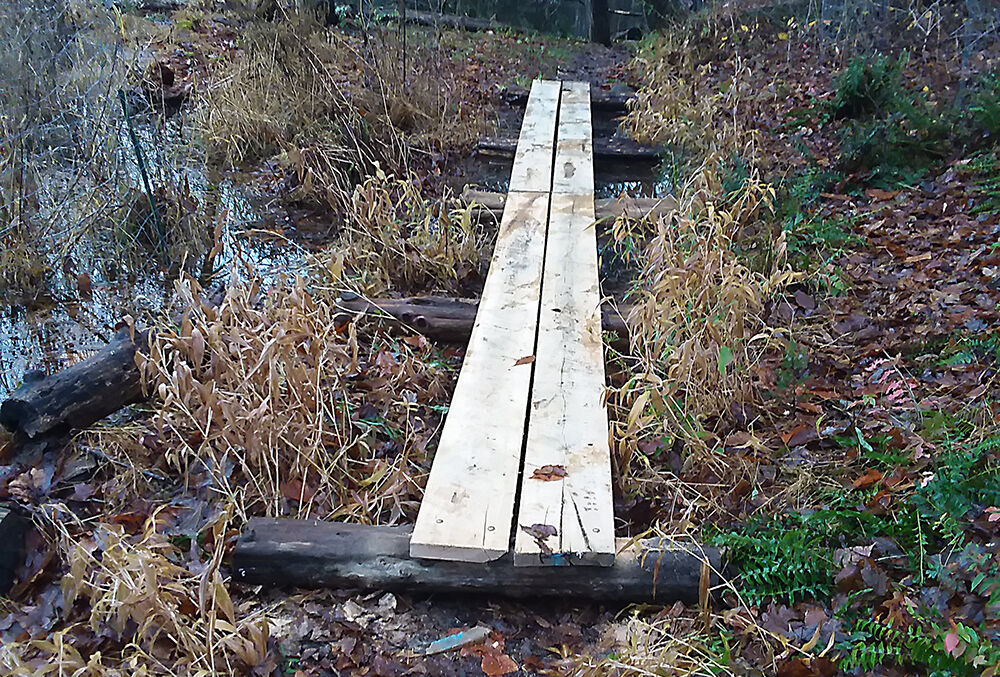 Andrew Morgan had to build a temporary bog bridge, shown here, after beavers flooded a trail section at the Halle Ravine.

Welcome to another report from the beaver beat.

When The Record-Review last provided an update on New York state’s official animal in August, the story chronicled its expansion into the Westchester Wilderness Walk/ Zofnass Family Preserve.

Now, the Halle Ravine, also in Pound Ridge, has a dam problem of its own.

“This wasn’t unanticipated — maybe a little sooner than I thought would happen, but not unanticipated,” said Andrew Morgan, land steward for the Pound Ridge Land Conservancy, which oversees 360 acres of protected land, including the 38-acre Halle Ravine.

Mr. Morgan first suspected beaver activity at Halle about a month ago after seeing signs of the beaver’s characteristic incisors gnawing at some of the preserve’s trees. Hoping to get ahead of the issue, he began wrapping some of the trees in hard cloth, which has a thin wire mesh too fine for beavers to chew through. He visited the preserve the first weekend of November for a volunteer work session and didn’t notice any significant changes in the habitat at the time.

However, one week later, Bruce Kramer, a resident of nearby Donbrook Road, stumbled upon a telltale sign — trail flooding. Mr. Kramer, who is also the volunteer land steward for Halle, walks the preserve’s trails nearly every day with his wife, Ellen Grogan, who sits on the Pound Ridge Conservation board.  But when they started out on their usual route last weekend, they immediately noticed something was afoot.

“Very quickly we saw that the level of the upper pond rose enough to partially flood one of the paths,” he said.

He promptly informed Mr. Morgan, who discovered a dam blocking the spillover to the first pond, resulting in partial flooding on trail paths.

Dubbed “nature’s finest wetland engineer,” according to the New York State Department of Environmental Conservation, beavers have a unique ability to alter their surrounding habitat, and with surprising speed. Within the last two years, Mr. Morgan has also been confronted with beavers on the nearby Isaacson Preserve and Olesen Preserve.

However, unlike those preserves, the scenic Halle Ravine boasts a 1.2-mile trail system.

“It’s a different scenario than across the road because that trail is in a well-used, well-established preserve, so we’re required to balance the needs of visitation with a new resident,” he said, referring to the beavers.

Once again Mr. Morgan has enlisted the help of Dan Aitchison, wildlife curator for Westchester County Parks and the county’s resident beaver expert. Both the PRLC and the WLT have consulted with Mr. Aitchison in the past regarding their beaver problems. Mr. Aitchison has more than 10 years of experience leading remediation of beaver environments, using devices like the “beaver baffle.” Also known as the “beaver deceiver,” this device has been employed to rectify flooding issues at both Isaacson and Olesen. Using a pipe to penetrate the dam, the beaver baffle curbs water flow and reduces water levels, while tricking the beavers into believing that their dam is intact. Since beavers are cued to begin construction at the sound and motion of running water, the beaver baffle also slows down their activity level. Unlike trapping, the use of the baffles does not harm to beavers or their habitat.

“If we had decided to trap, it’s likely we would be experiencing this every single year because we decided to keep the colony across the road,” Mr. Morgan said. “It’s about learning how to adapt with it.”

The PRLC’S approach to manage the beaver problem without trapping reflects the conviction that humans should try to live in harmony with nature whenever possible and not destroy the lives of other animals if other solutions are possible.

At Halle Ravine, until the water level recedes, Mr. Morgan has built a couple of temporary bog bridges to help visitors cross any flooded routes.

Although the arrival of a beaver dam presents new complications, it also lends itself to new learning opportunities. Mr. Morgan said he looks forward to creating educational material for the preserve about its new inhabitants. The beaver’s alterations will also help increase biodiversity at Halle, he noted, by attracting new insects and wildlife to its changed landscape.

For more information about the PRLC and its local preserves, visit prlc.net.