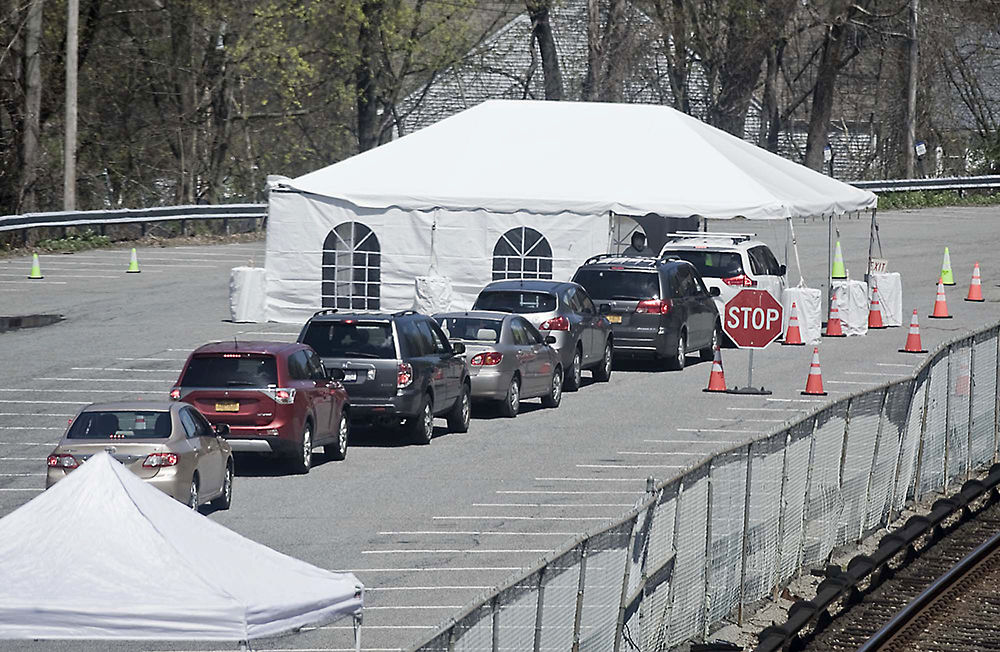 The drive-through testing site in Bedford Hills was headed and operated by Murphy Medical Associates. 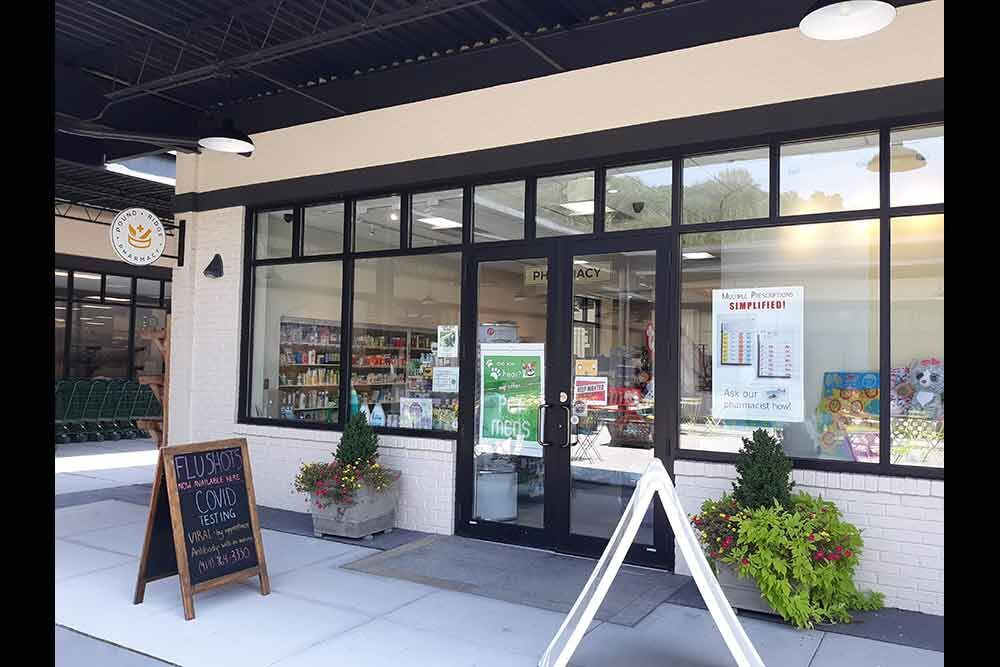 The Pound Ridge Pharmacy has been offering COVID-19 and antibody testing at its Scotts Corners location since July through Murphy Medical Associates. 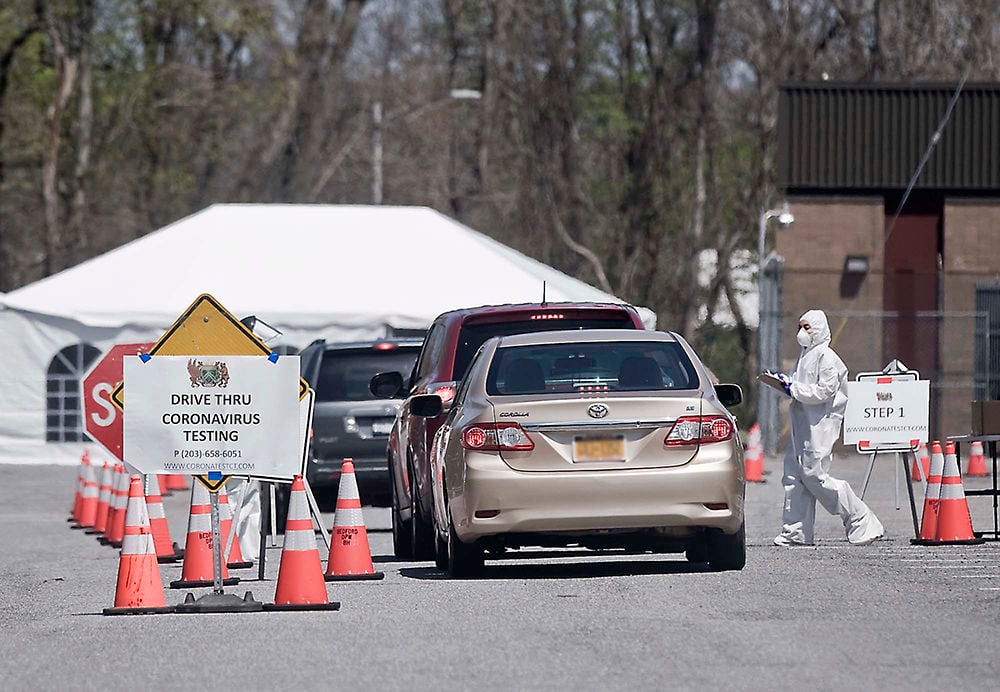 A worker handles sign-in at the drive-through testing facility.

When COVID-19 cases began to spike in early spring, elected officials in northern Westchester started scrambling to request assistance from the federal and state government in setting up their own local testing sites. As the months wore on, their pleas for assistance went largely unmet.

In Bedford, Supervisor Chris Burdick formed a working group with Mount Kisco Mayor Gina Picinich to establish a local testing site. The two worked with County Legislator Kitley Covill, officials from the Westchester County Department of Health and other Town of Bedford staff. Mr. Burdick said he approached both CareMount Medical and Northern Westchester Hospital about setting up a drive-through testing facility, but was turned down “because they felt they didn’t have the capability to do it.”

“We were faced with a dire situation that was so severe that the county had arranged with the Army Corps of Engineers to convert the County Center to a hospital because of very real projections at that time that we were going to run out of hospital beds because the virus was running rampant,” Mr. Burdick said in an interview.

It seemed like a stroke of good fortune when a doctor based in Greenwich, Connecticut, stepped in and said he could operate the testing site the officials saw as sorely needed. That doctor was Dr. Steven Murphy, owner of Murphy Medical Associates.

“It was absolutely clear that we had to do everything we could to protect people from the virus and to adhere with the orders of the governor by providing testing,” Mr. Burdick said.

“Dr. Murphy was the only game available. We did look into Dr. Murphy’s background and there was no indication of any misdeeds or inappropriate actions.”

Mr. Burdick moved forward with Dr. Murphy to launch a drive-through testing facility at the Bedford Hills train station in early May.

The testing site opened May 2. It was seen as a valuable resource in the fight to contain COVID-19. After initially being limited to first responders and town employees, the facility was soon opened to all residents of Bedford, Pound Ridge and Lewisboro, whose officials also promoted the services provided by Dr. Murphy. Within its first two weeks of operating, the facility had tested over 700 people.

“We helped set that up and the majority of the people were very pleased that they had the testing options,” Pound Ridge Supervisor Kevin Hansan said this week.

Between early May and mid-July, the Bedford Hills drive-through facility processed 3,824 tests, according to data Dr. Murphy provided to The Record-Review several weeks after the facility closed. Of those tests, about 0.65%, or 25, were COVID positive, according to Dr. Murphy’s records. Fifty-three of the test results were still pending at the time of the report.

The testing facility in Bedford Hills began to wind down in mid-July, as the county entered Phase 4 of New York state’s staged reopening plan. Not long after, Dr. Murphy informed The Record-Review he was having problems with the insurance companies. In an email dated July 13, he wrote that “over 750 patients were uninsured” and had their testing paid for by Murphy Medical Associates. Dr. Murphy said he would seek reimbursement from the federal Health Resources & Services Administration, but he felt it wasn’t likely.

“Less than 1000 of the tests performed have been paid by insurance so far, so ultimately we have paid for the other 1900-plus ‘insured’ tests as well. We will await payment from the insurers. The worst of these is CIGNA who is refusing to pay as they are in pre-payment audit status. But we are committed to NEVER sending a bill to patients, that will apply with any testing we do,” Dr. Murphy wrote.

At the email’s close, he added that “despite these challenges” he was excited to announce a partnership with Pound Ridge Pharmacy to offer antibody testing. He said he planned to expand his services of “COVID-19 PCR testing as well as antibody” testing. And, tagged on at the end, “COVID CARE testing including ultrasounds and bloodwork.”

Dr. Murphy did not elaborate on all of the testing included by his company provided under the umbrella of “COVID CARE.” But the picture became clearer when The New York Times recently published a story detailing the experiences of several patients whose insurance companies were billed hundreds or thousands of dollars for testing performed at the Bedford Hills facility by Murphy Medical Associates. Many of the charges were for tests the patients said they did not request.

The Record-Review subsequently reached out to residents in Pound Ridge, Bedford and Lewisboro for their own experiences and heard similar concerns about Dr. Murphy’s billing practices.

For instance, Bedford resident Lindsay Cain Hearon was surprised when she received the lab results for her 3-year-old daughter’s COVID-19 test. Among the 16 different tests listed, one was for chlamydia, a sexually-transmitted disease. (“She tested negative,” Ms. Cain Hearon said in good humor.) In light of Dr. Murphy’s aggressive testing approach and the accounts of similar experiences in the Times story, she said she was now having second thoughts about going through with her next testing appointment.

Several readers said the public attention over the billing practices of Dr. Murphy moved them to reexamine their insurance statements for COVID-19 testing they received. One Pound Ridge resident who spoke to The Record-Review and asked to remain anonymous, said he and his family had a good experience getting tested at the Pound Ridge Pharmacy initially. He commended the staff for being friendly and patient in explaining the testing process. But he said problems began when he tried to access the test results through Dr. Murphy’s firm.

“Even with the patient portal, it was such a nightmare to set up the account and we were sent links to two completely different portals which delayed the results for our first test by several days. Then, when you try to call the office number given on the portal — to their office in Greenwich — it is impossible to get through. We called over several days, maybe 20 times and finally we got through to someone ... already then we had a feeling that something wasn’t right with this practice.”

When he did get the results back, he found it unusual that his family received results for a complete panel, “showing results for just about every virus you can imagine,” even though they only requested the COVID-19 test. And then there were the unnecessary phone calls — a doctor called personally to deliver the results of his son’s test, which had already been uploaded to the patient portal several days prior. None of it made sense until he read The Times article, the resident said. After reviewing his insurance statements, he also found that Dr. Murphy was charging the insurance carrier for three separate “medical examinations” — one for each person tested — for around $300. The diagnostic tests were then billed separately for $1,500 each. “I honestly don’t know what a reasonable fee for testing is, but $1,800 clearly seems exorbitant and to date our insurance has not paid anything to Dr. Murphy since they are still waiting on requested medical files to complete processing,” the resident said.

When Pound Ridge resident Jack Goldberg heard the news about Dr. Murphy’s billing practices last week, he promptly cancelled testing appointments scheduled for himself and his wife at the Pound Ridge Pharmacy. Up until that point, Mr. Goldberg said he had no complaints about the testing process set up with the local pharmacy.

“I was pleasantly surprised by Murphy’s online portal,” he said in a phone interview. He found the registration process smooth, the pharmacy’s location convenient and the customer service accommodating. But when he learned about actual accounts of unnecessary and expensive testing, he grew nervous about following through with the appointments.

Now he’s back at square one. Mr. Goldberg said the next closest testing facility for him is the CVS Pharmacy in Bedford Hills. When he began completing CVS’s online intake form and was asked if he was displaying symptoms, Mr. Goldberg answered truthfully that he was not. He was just trying to get a test to make sure he was negative before traveling to Boston to visit his grandchildren. His honesty cost him, as the portal rejected his request for a COVID-19 test.

“I’m sure there are people doing this, you can’t really blame them, who have to lie about their medical situation in order to get the test done from CVS,” Mr. Goldberg said. “Everybody, all the powers that be in the medical community are saying ‘get tested, get tested’ and then I go to the CVS website and they tell me ‘You’re asymptomatic, you shouldn’t waste the materials.”’

Experiences like Mr. Goldberg’s partly illustrates why there’s still a high demand for testing and not enough facilities to meet that demand. That’s the reason Sonali Costa, owner of the Pound Ridge Pharmacy and the North Street Pharmacy in Greenwich, said she first partnered with Dr. Murphy in July.

“We felt this was an important service to offer,” Ms. Costa said in an interview. “And the demand is high ... it’s been non-stop since we started.”

She gets tested herself through Dr. Murphy every two weeks and was just as surprised as her customers by recent news reports. Ms. Costa stressed that the Pound Ridge Pharmacy and Murphy Medical Associates are entirely separate entities and so she has no information or understanding of the company’s billing practices. For now, the Pound Ridge Pharmacy will continue offering COVID-19 and antibody tests in partnership with Dr. Murphy and Murphy Medical Associates.

While the Bedford Hills drive-through testing site was operating, Mr. Burdick said he did occasionally receive complaints about Dr. Murphy’s billing and fees. “Any time I had a question raised I advised Dr. Murphy and I would copy the person, and they were prompt in replying to them,” he said of Dr. Murphy’s staff.