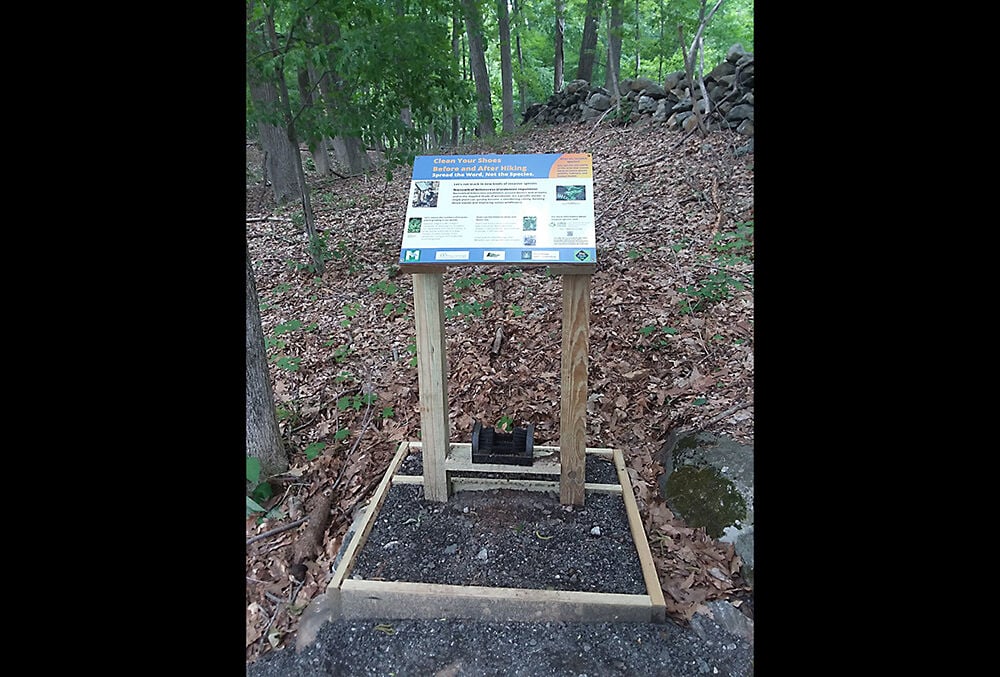 The first boot brush station was installed at the Armstrong Preserve. 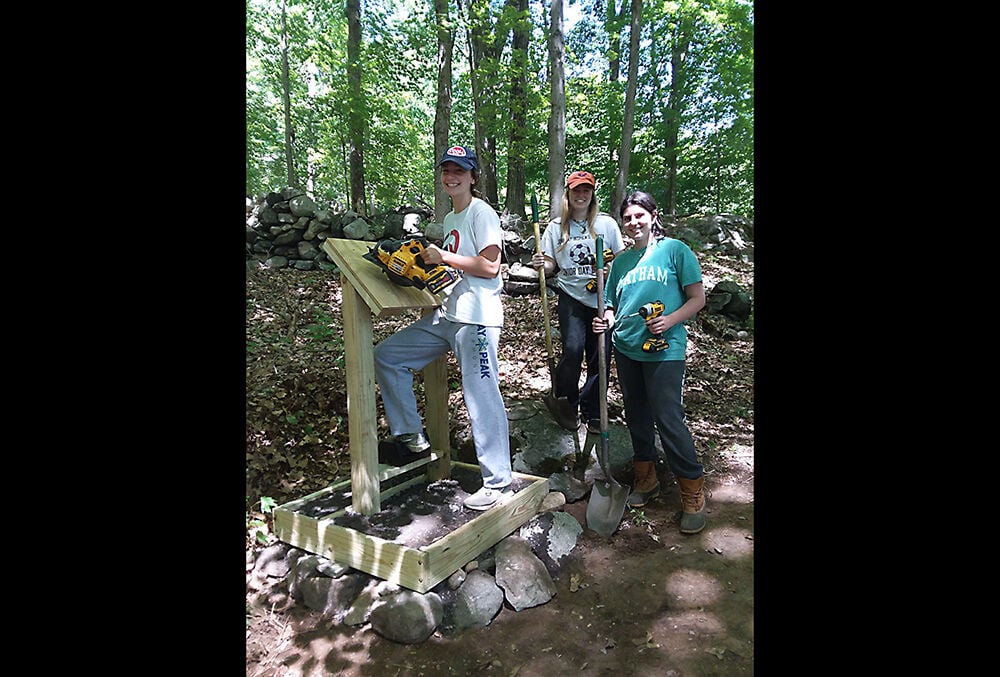 The first boot brush station was installed at the Armstrong Preserve.

The Pound Ridge Conservation Board, the Henry Morgenthau Preserve, Pound Ridge Land Conservancy and The Invasives Project-Pound Ridge are installing boot brush stations at nine local preserves throughout the summer.

The stations are seen as providing an effective way to cut down the spread of invasive seeds and pests that ride on the bottom of shoes or boots. By cleaning the bottom of their shoes before and after walks or hikes, visitors to local preserves can help stop the spread.

“This is just another tool in our toolbox,” said Land Steward Andrew Morgan. “It’s a way of enjoying our trails responsibly and helping preserve our native flora and fauna.”

Mr. Morgan and PRLC volunteers have already installed boot brush stations at the

Armstrong Preserve, Clark Preserve and Halle Ravine Preserve. A station also has been erected at the town-owned Eastwoods Preserve and the Henry Morgenthau Preserve, which is a partner on the project. The remaining stations will be placed at local preserves, and the Town Park, before the end of summer.

The stations are funded by a grant from the Lower Hudson Partnership for Regional Invasive Species Management using funds from the Environmental Protection Fund as administered by the New York State Department of Environmental Conservation.

Each station provides a display with information about common invasive species, such as the emerald ash borer, and emerging threats, like the spotted lanternfly. They also display a QR code that gives access to the Lower Hudson PRISM website for additional information.

Everyone has a reason to stay vigilant in the fight against invasives, Mr. Morgan said. “No matter who you are, what your interests are, what you do for work ... these pests have the potential to disrupt something that you care about in your life,” he said.

To illustrate his point, he discussed the widespread destruction of the emerald ash borer on local properties. Mr. Morgan said he was aware of several residents who had to pay thousands of dollars to cut down dead trees as a result of the invasive insect. “It’s the homeowners who are taking the brunt of invasive tree pests and their direct costs. So, everyone has an incentive to be on the lookout,” Mr. Morgan said.

This is exactly why early detection of invasive species is so critical, said Carolynn Sears of TIP-PR. “The ones that are here and established, we can only do our best to combat. But it’s the new ones that we can really do something about — we can stop their spread and keep them out,” she explained.

Residents who see something unusual growing on their property, Ms. Sears recommended, should use an app like Seek and iNaturalist, or contact a member of Lower Hudson PRISM to learn whether it’s native or invasive. Not long ago while walking along her own property, Ms. Sears spotted narrowleaf bittercress. She hadn’t noticed it before, but quickly learned it was a prolific producer — a single plant can produce up to 5,500 seeds dispersed a short distance from the parent plant.

“It’s important to catch these things early because a seed is a very little thing, but one seed can produce literally hundreds of others — the multiplying effect is dramatic,” she said.

Residents are encouraged to learn more about the invasive species on their own property through a free consultation with TIP-PR experts. At an owner’s request and following social distancing precautions, two volunteers will walk a property with the homeowner to identify invasive and native plants growing on the property. Since a key to controlling invasives is early detection and rapid response, the group is primarily looking for less common species such as sapphire berry, swallowwort and porcelain berry. Requests for visits can be sent to consult@invasivespoundridge.org.

Other Invasive Species Awareness Week activities include a display and free literature on the spotted lantern fly (the latest destructive pest moving toward the area) at the Pound Ridge Library. For a more hands-on experience, head to the Mianus River Gorge Preserve tomorrow, Saturday, June 12, to help cut Japanese barberry, pull oriental bittersweet and remove other invasives to promote native plants and restore the health of the forest floor. For more information and to RSVP, call 914-234-3455 or email info@mianus.org.