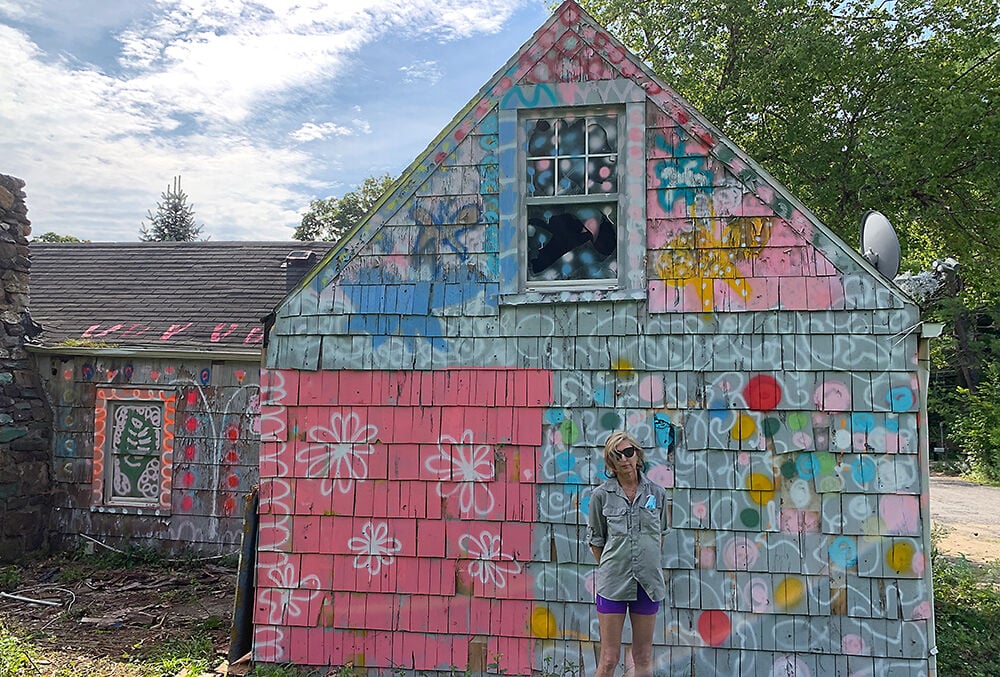 Artist Vanessa Smith in front of the abandoned building she painted. 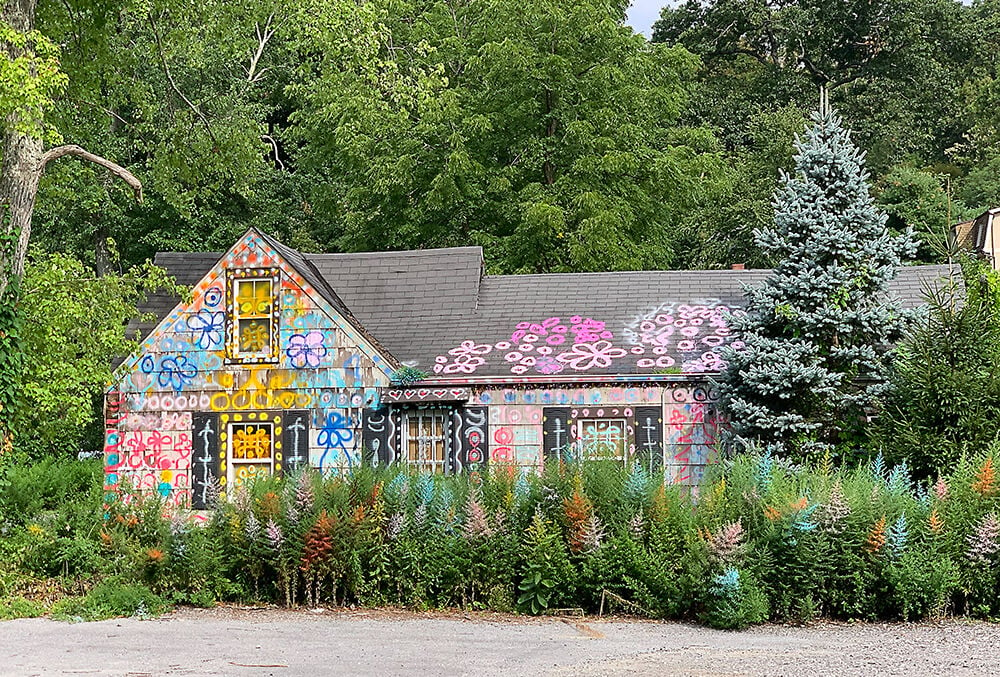 Another view of the house painted by Vanessa Smith. 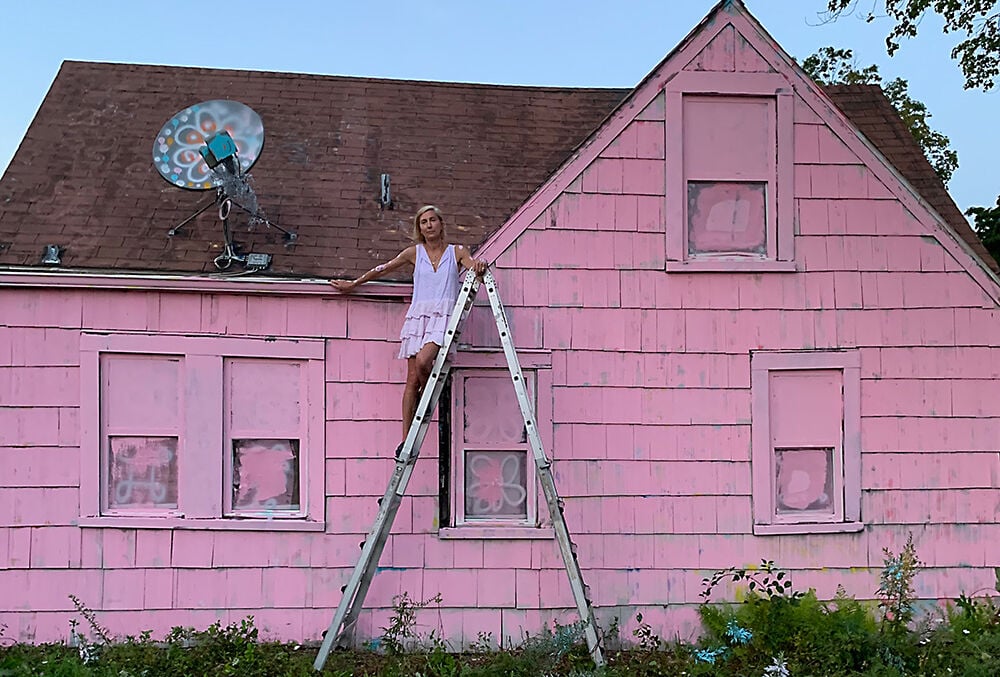 Vanessa Smith on a ladder after repainting the house, apparently to shield the building owner from a Building Department violation.

Artist Vanessa Smith in front of the abandoned building she painted.

Another view of the house painted by Vanessa Smith.

Vanessa Smith on a ladder after repainting the house, apparently to shield the building owner from a Building Department violation.

Artist Vanessa Smith said her latest project was about impermanence. So, don’t go looking for it, because she wasn’t kidding: it’s already gone.

This past weekend, she painted it over.

The Little Painted House is what she called it, and that’s exactly what it was, located  next to Ristorante Lucia on Old Post Road in Bedford Village. “The property next door to our restaurant had been abandoned for about 10 years before we bought it about four years ago,” said Christina Diana, whose family has owned Ristorante Lucia for 14 years. “Vanessa asked us if she could paint it and make it beautiful before it comes down.”

“This house was probably one of the first buildings I saw when I moved to Bedford,” Ms. Smith told The Record-Review. “And I love Ristorante Lucia. I’m here at least once a week and I was thrilled when they said I could paint the little house next door.”

“I intended no harm,” she explained, “in fact, the very opposite. Everyone knows the house will eventually be torn down, and I just wanted to love it before that happened while it is still here.”

She heard from supporters of her project. Unfortunately, not everyone agreed. The restaurant heard from the Town of Bedford’s Building Department, saying it had received complaints from residents who considered the brightly painted structure an eyesore.

“One person termed the way I painted the little house ‘graffiti,’” Ms. Smith said. “Another person complained that it is a ‘Woodstock Hippie House,”’ an assessment she found pleasing. “Cool! What a compliment,” she said.

Ms. Smith is an accomplished painter with over 25 solo and group shows, including a successful show at CB Gallery in Katonah last year.

“Once again Vanessa continues to amaze with an eternal optimism and ethereal talent that is so magical to me,” CB Gallery owner Christopher Brescia said. “She has taken her unique sensibility and applied it to a house that has been in decay in Bedford Village for quite some time, and turned it into a delightful folly.”

Indeed, the gallery had been planning an event called “Love It While It’s Here” at the house this Sunday. But apparently so many people wanted to attend that organizers felt they could not abide social distancing guidelines and cancelled the gathering.

Ms. Smith recounted that she initially found the door to the little house open, but did not go in. “The house has stood alone and open for years, since I heard the basement flooded,” she said. “It was abandoned, and it looked like the people who lived there were forced to leave in an instant.”

Originally, Ms. Smith planned to paint the house with brushes. She was thrilled when Bedford Ace Hardware donated $1,500 worth of discarded paint, but it turned out the house was in such bad shape that the wood crumbled under her brush. She had to use spray paint instead.

After receiving permission from the owners, she got to work straightaway. She painted first thing in the morning to avoid spraying paint when there were restaurant customers around. She said many curious people stopped by to take pictures and ask her about her art project. “I just said it’s an offering of happiness, like a carnival or something you view from a distance. It is there to be what you wish it to be.”

She absolutely loved painting the house, Ms. Smith said. “It reminds me of my mother, a portrait painter, whose four-year death anniversary just passed. I see her talking about painting and houses that need to be tended to. I see my father as I paint his favorite yellow. I see the blues and pale pinks of my grandmothers and aunts. Of course, my son is green, my husband aqua blue and my brother is orange. They are all there, patiently revealing themselves.”

Her love of patterns, she said, stems from early work as a freelance textile designer, painting sheets and pillowcases. She eventually became a mural painter. “I love the large scale of walls,” she said. “My mother loved these things, too, and she and I bought old textiles from the many flea markets we visited together. She was my inspiration in all things artistic.”

Her mother was a real estate broker and loved quaint houses, big and small, the artist said. Her influence on the Little Painted House came through in another way, too. “The reason I painted the back, too, is my mother always said, ‘Always clean behind the refrigerator, it doesn’t matter that nobody can see it,’ so it’s in honor of her.”

Ms. Smith said that while social division, the pandemic and protests stretch around much of the world, she wanted to paint a mural about positivity. “Many people die alone without family, without connection, without care,” she said. “Everyone is doing their best to salute, salvage, put together what they can for the dying and the families left behind. I was thinking about this as I painted. The house is a sending off, a tribute, and for others who have died along the way.”

She knows the house will eventually be torn down. So, criticisms and complaints over the project “perplex and annoy” her.  And then, there was the latest wrinkle.

“I was told that if I didn’t paint (over) the house — pale pink is what I decided to use, instead of white — that Lucia’s would be in violation with the building department. Violation of what? It was painted in flowers and happy colors.”

“Nobody paid any attention to that building until I started painting,” Ms. Smith said. “I think complaining about the paint on a house is very low on the list of priorities in our current world situation, but it reeks of what the protests are trying to demonstrate against negativity, and misunderstanding of things that are different.”

She hopes to turn what happened into something positive. “I would like to meet the people who have complained,” she said, “maybe I would learn something useful for my future work. I embrace discussion about everything, even politics. I believe that one of the reasons our country is so divided is that we shy away from openly discussing things that are potentially uncomfortable and controversial. We need to talk and be open. We need to work on what’s important and let the small stuff go by.”

Too bad we could not have a big “Woodstock Hippie House” party to say goodbye to the Little Painted House. Vanessa is such a talented and prolific local artist not only in painting (see http://www.vanessasmithpaintings.com) but also in film (see https://vanessahsmithpictures.com) so I can’t wait to see what she’ll think of next.